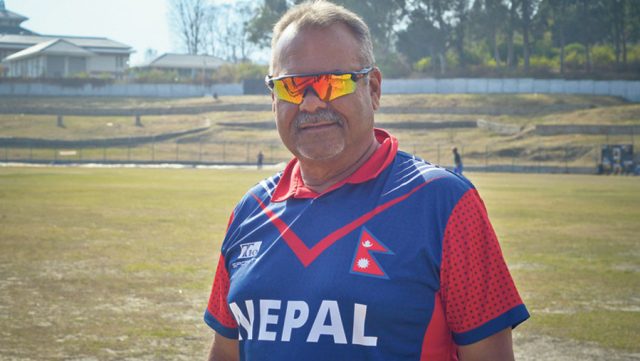 Cricket Association Of Nepal (CAN) has announced the vacancy for the men’s cricket team head coach on October 18. The post was vacant after Dav Whatmore, a world cup winning Australian coach resigned from the position on August 27 citing personal reasons.

As mentioned in the vacancy post of CAN, the Head Coach will be responsible for leading the development of the Men’s Cricket Team to produce consistent performances at the International level through the design and delivery of well-structured and progressive coaching programs. One should have a minimum of five (5) years of coaching experience in professional cricket and ECB / CA Level 3 (or equivalent) accredited and above to apply for the post as per CAN.

Whatmore, who was appointed as Nepal’s head coach in December last year, announced his decision to step down as the head coach of the Nepal men’s cricket team after the ICC Cricket World Cup League 2 matches in Oman.

The 67-year-old coach then joined Baroda Cricket Association as a Director of Cricket and the head coach in whopping 1 crore per season, being the most expensive coach in the history of India’s first-class cricket.

Whatmore, in his short tenure, accomplished some historical achievements. Under his coaching, Nepal clinched the T20I triangular series featuring Netherlands and Malaysia, ending their 11 year-long series win drought at home. Previously, Nepal lifted the trophy of ICC World Cricket League Division-5 at its own backyard in 2010.

In his last assignment, Nepal won two of their four matches in Oman under ICC Cricket World Cup League 2. Nepal registered their first ODI victory against the host side Oman in that tour as well.

Whatmore did a remarkable job for Nepali cricket giving opportunities to youngsters like Aasif Sheikh, Kushal Bhurtel and Gulsan Jha, who eventually justified their astonishing selection in the national team with their brilliant performances. Whatmore, former Sri Lanka, Bangladesh, Pakistan and Zimbabwe coach, had replaced Umesh Patwal after Nepal were without a head coach for around 10 months.