Cricket Association of Nepal (CAN) has suspended skipper Sandeep Lamichhane with immediate effect over alleged rape charges. The decision came after an arrest warrant was issued against the leg-spinner.

The youngster has been accused of raping a minor on Wednesday, September 7. The incident came into limelight after the alleged victim, aged 17, lodged a complaint against the star cricketer to Kathmandu police. 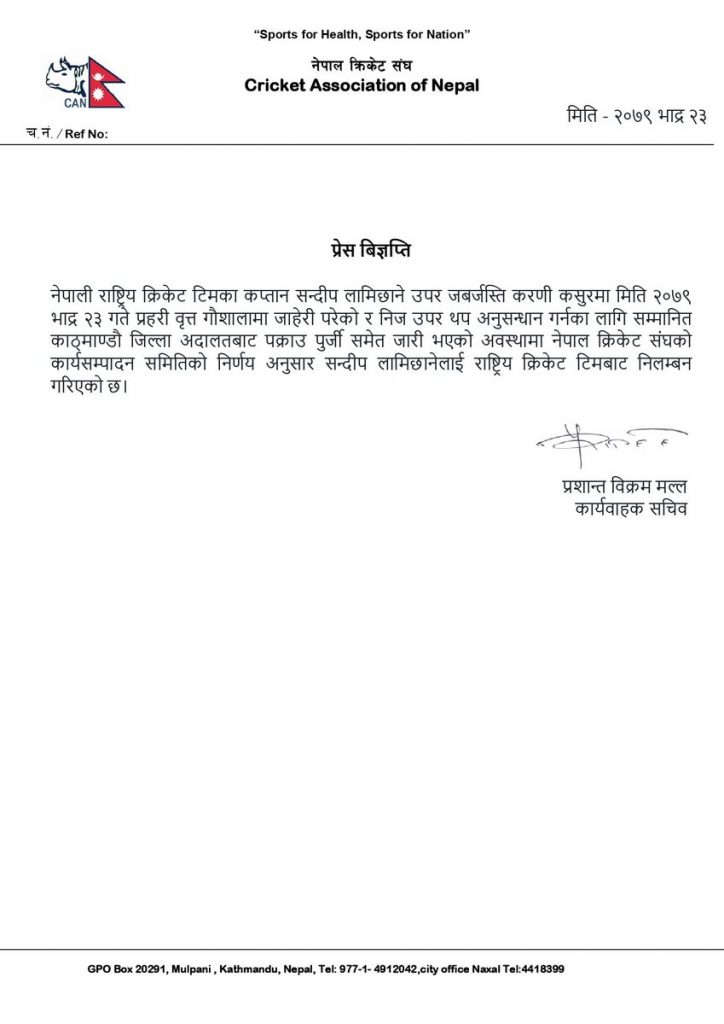 According to the police report, Sandeep Lamichhane asked the victim to go on a date on the eve of the Nepal cricket team’s departure to Kenya on September 22. She couldn’t return to her hostel as the gates get closed by 8 pm and was compelled to stay in a Kathmandu hotel.

Incidentally, the minor girl was a fan of Sandeep Lamichhane and started talking to him over WhatsApp and Snapchat.

The Kathmandu District Court has ordered an arrest warrant for Sandeep Lamichhane, according to the police. Lamichhane is presently playing in the Caribbean Premier League in Trinidad & Tobago. He competed for his country in the ODI and T20 series against Kenya.

“The district court has issued an arrest warrant for Lamichhane who has been accused of raping a minor,” said the police officer on the condition of anonymity given the delicate nature of the matter.

Lamichhane is one of the most celebrated cricketers from his country. He was one of the eleven cricketers to play in Nepal’s first ODI match, against the Netherlands, back in August 2018. So far, he has played 30 ODI and 44 T20I for Nepal, picking up 69 wickets and 85 wickets respectively.

Virat Kohli Reveals The Name Of One Indian Cricketer With Weird...