Australia opener David Warner has hailed Virat Kohli’s dominant run in international cricket saying it will be impossible for current cricketers to get anywhere near the India skipper’s tally of 70 international centuries. Kohli belongs to a league of his own making a habit of hitting centuries consistently.

Kohli made his debut for India in August 2008 after leading the U19 team to victory in the ICC U19 World Cup 2008. Since then, there has been no looking back for the cricketer from Delhi. Currently, he is the only batter to average over 50 in all three formats of the game.

Virat Kohli has represented India in 91 Test matches and 254 One Day Internationals scoring a whopping 7490 and 12169 runs respectively. The 32-year-old has also featured in 90 T20 Internationals collecting 3159 runs at a strike rate of 139 and an average of 52.6. Along with this, he has also 70 international centuries under his belt.

Notably, Virat Kohli is third on the list of batsmen with the most international hundreds despite not scoring any century since November 2019. The India captain’s century drought in the ODI format stretches even longer as he has not gone past the 3-figure mark since his twin hundreds against West Indies in August 2019.

Kohli last scored in triple digits for India in the Day-Night Test against Bangladesh at the Eden Gardens Stadium. Since then, Kohli has failed to convert his 50s into three-figure scores and the wait for his 71st International ton continues. This has been the longest period that Kohli has endured in his international career where he has gone without scoring a hundred.

Despite the recent drought, Virat Kohli leaves his peers by a huge margin. Reacting to a graphics of active cricketers’ century stats on his Instagram story, David Warner circled Kohli out and wrote. 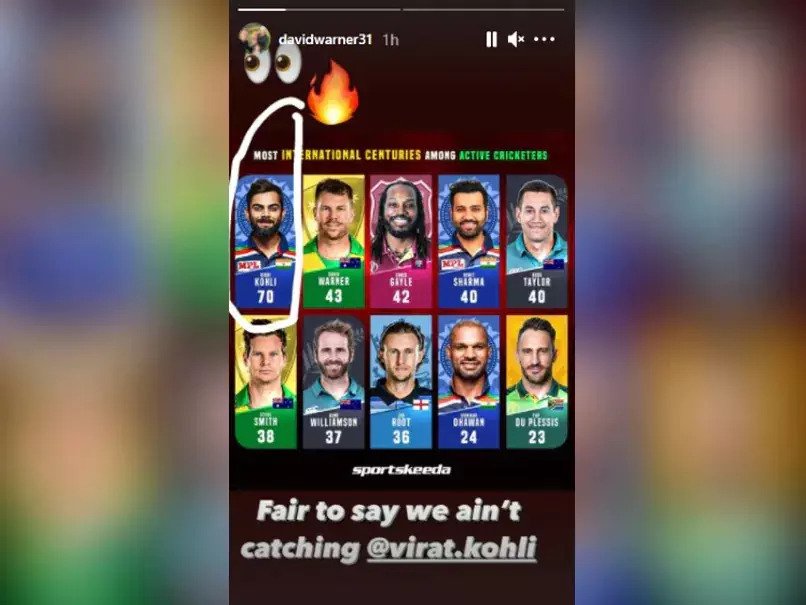 I am an accountant by qualification, my parents thought their obedient son would study further to become a CA, but I had other things in mind. An ardent Cricket fan is following his passion and making a living watching and working around his favourite sport.
Feature
Show More
Videos
Show More
Back to top button
Close
Close
Close