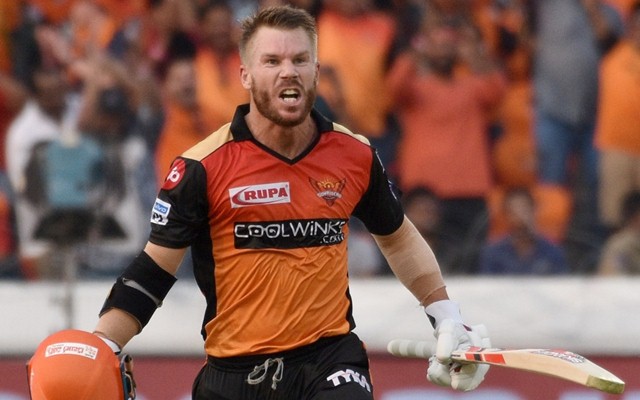 Ahead of the much-anticipated IPL 2021 final between Chennai Super Kings (CSK) and Kolkata Knight Riders (KKR) on Friday, star batsman David Warner shared a picture that clearly shows which team he would be supporting. Incidentally, Warner was part of Sunrisers Hyderabad, who finished last in the points table.

Warner, who had a raw deal with SRH after being axed from the post of SRH skipper, shared a picture where he can be seen wearing the yellow jersey. David Warner was not alone as his daughter also gave him company.

David Warner supporting CSK tonight and also posted an edit of him and his daughter in CSK jersey. pic.twitter.com/VlVh4D5P1f

However, David Warner removed the post from Instagram and posted another photo after receiving severe backlash on social media.

Meanwhile, speculations are rife that David Warner might not be retained by Sunrisers Hyderabad for the upcoming mega auctions where each team can retain a maximum of two players.

David Warner, who led Sunrisers Hyderabad to the title in 2016, expressed hurt at how he was treated over the course of the season. He would love to remain with Hyderabad next season, but he admits that might not happen, after being benched for their last five games of IPL 2021.

“The disappointing thing for me was not being explained why I was dropped as captain,” he said. “I think if you want to go along the lines of form, it’s a difficult one because I guess whatever you’ve done in the past would have some weightage moving forward, especially when you’ve played 100 [95] games for the franchise.

“I had four bad games, two run-outs in that, on slow and low wickets in Chennai. It’s difficult, a bitter pill to swallow but I don’t think I will ever get answers and must move on. It’s time to look forward, there’s another auction coming up. I’d love nothing more than to represent Sunrisers still, but the decision remains with the owners and what direction the franchise wants to go in,” David Warner concluded.