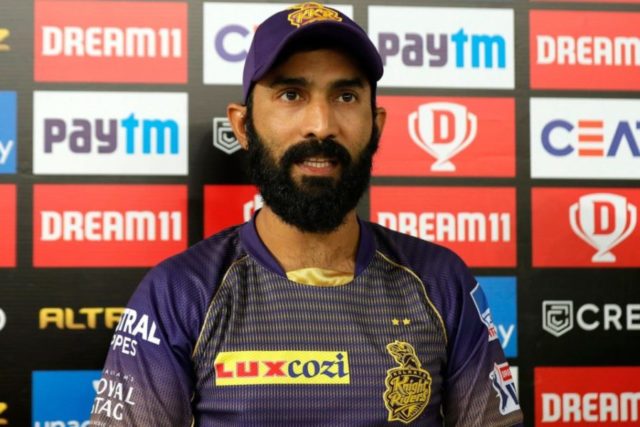 Another top-order batting failure ensured Kolkata Knight Riders go down against Delhi Capitals despite a late impetus at the Sharjah Cricket Stadium. Chasing 229 runs, Kolkata fell short of 18 runs. Speaking at the post-match presentation ceremony, Dinesh Karthik said he was proud of his batters of how they fought till the last ball.

Chasing a mammoth total, Kolkata failed to get a good start as Sunil Narine’s poor run continues. Nitish Rana and Shubman Gill tried to put the gears on but Delhi Capitals pegged back in regular succession to increase the asking run rate. Kagiso Rabada and Anrich Nrotje were spot on with the new ball before Harshal Patel continued the good job.

Dinesh Karthik missed the tick holding Eoin Morgan and Rahul Tripathi till the very end. Both of them tried their best taking Marcus Stonis and Kagiso Rabada for cleaners but Nortje pegged back in the right time to take the game home in favour of Delhi Capitals.

Batting first, Delhi Capitals used small ground and flat wicket to best. Led by skipper Shreyas Iyer from the front, Delhi posted 228 runs in their quota of 20 overs. Prithvi Shaw and Shikhar Dhawan gave the perfect start to give Iyer and Rishabh Pant the platform to go all out for the kill.

Shaw got out after a well made 66 before Iyer and Pant ran a carnage. They heaved their bat at almost everything leaving Kolkata Knight Riders skipper guessing. He tried everyone at his disposal for a breakthrough but it hardly mattered for Delhi Capitals.

Shreyas Iyer remained unbeaten on 88 runs from 38 balls including seven fours and six sixes which almost took the game away from Kolkata before the bowlers put the final nail in the coffin. Speaking at the end of the game, Dinesh Karthik stated he is proud about the fight the batters have put in.

“The way the boys batted is something I am proud of. We kept fighting, which is the nature of this team. To be honest, a couple more sixes, and we would have crossed the line,” Dinesh Karthik said.

The Kolkata Knight Riders also backed Sunil Narine after his poor run continues. Dinesh Karthik also added that the management wants to give more time to Andre Russell to make an impact in the game.

“We want to give Russell more time to make an impact on the game. We will discuss Narine’s role with the coaches, but I have got full confidence in Narine,” Karthik concluded.