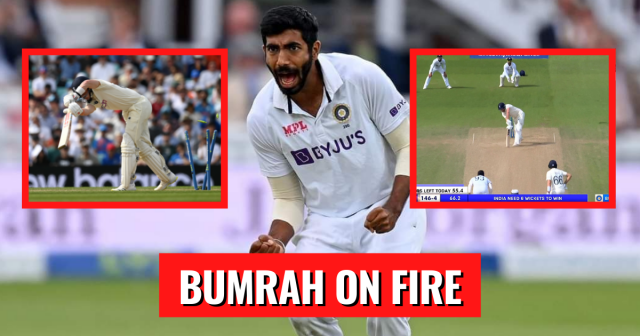 The ball that dismissed Pope, came back after pitching and the right-hander played down the wrong line. This wicket has really given Indian an opening into dismissing the England middle-order quickly with skipper Joe Root being their only hope.

1️⃣0️⃣0️⃣ Test wickets for Bumrah! 💥
He shatters the stumps and gets there in true Bumrah style!

From 77 for no loss to 140 -odd for four, The hosts have lost four wickets for seventy runs. England need to chase a record fourth-innings total at The Oval to take a lead in the Test match.

Soon after he dismissed Pope, Bumrah came back to dismiss Jonny Bairstow in his very next over. England slumbered further with the wicket of Bairstow which was Bumrah’s 101st in Test cricket.

India came back strongly on the final day after the England openers kept the visitors at bay with a 77-run opening stand. All that hard work was undone after Shardul Thakur took the first wicket of Rory Burns.