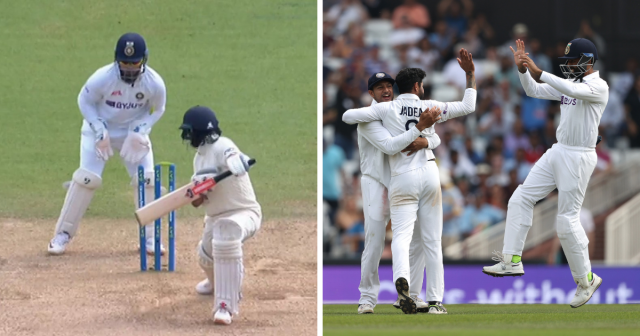 Ravindra Jadeja has finally arrived with the ball as he removed well-set Haseeb Hameed with a cracker of a delivery moments after lunch on day 5. With this wicket, India have their tail up as they need six more wickets to go 2-1 up in the series with one more Test to go at Old Trafford.

The visitors began the second session on the right note as Ravindra Jadeja cleaned up Haseeb Hameed, who held England’s batting from one end. Jadeja got one to turn from the leg-stump beating Hameed’s defence to crash onto the stumps leaving the batter shocked.

Haseeb Hameed is bowled for 63 runs by Ravindra Jadeja.

Ravindra Jadeja, who is expected to use the rough patches has finally picked his first wicket in his 23rd over.

A good ball to end an impressive innings.

With the momentum on their side, India soon removed Ollie Pope to taste some blood with six wickets required to win. England are currently placed 145/4 at the time of writing with all their hopes pinned on their skipper Joe Root. India, on the other hand, will hope to get rid of in-form Root to have a shot at England’s tail.

England all-rounder Moeen Ali said that fellow spin-bowling all-rounder Ravindra Jadeja of India would be the biggest threat for the hosts at the Oval on Day 5 of the fourth Test.

“Jasprit Bumrah is one of those bowlers that can make anything happen, but Jadeja is the biggest threat on that wicket. It’s such a flat wicket but we’re still going to have to play well. India always fight back strongly and that’s something we’re going to have to be wary about,” Ali told Sky Sports.