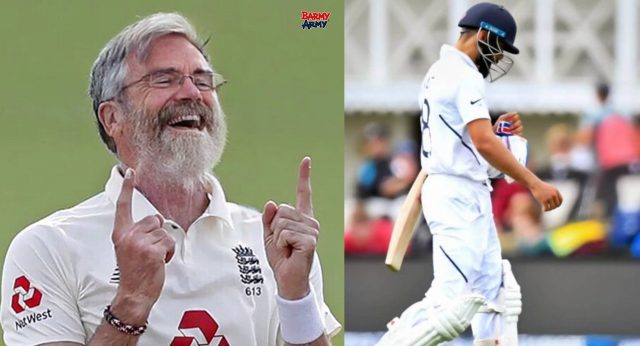 In the first test match against India at Trent Bridge, James Anderson picked up a four-wicket haul in the first innings. He dismissed the Indian skipper Virat Kohli for a golden duck.

The Virat Kohli and James Anderson rivalry on the field goes back to the 2014 India tour of England. Anderson dismissed Virat four times in five Test matches, that series. Since then, the English pacer did not have any success against the Indian skipper. Finally, in the first Test, Anderson got the better of Kohli.

The year is 2050 and a 68 year-old Jimmy Anderson has taken his 1,500th Test Wicket snicking off Virat Kohli Jr first ball. pic.twitter.com/JwKQhataCY

The netizens were unimpressed with Barmy Army’s post. They bashed the England cricket team’s fan club for taking a dig at the Indian skipper. The comment section was flooded with Indian cricket fans, trolling Anderson and the Barmy Army.

A fan pointed out Virat Kohli’s average against James Anderson in test cricket. He wrote, “Virat Still avg 45+ Avg against him And he owned him 2018 and Still 9 innings left in 2021 forgot this ???”

The 61 year old Virat Kohli has made his 200th century.This is his 50th century against England. It is raining runs at the Lord's.