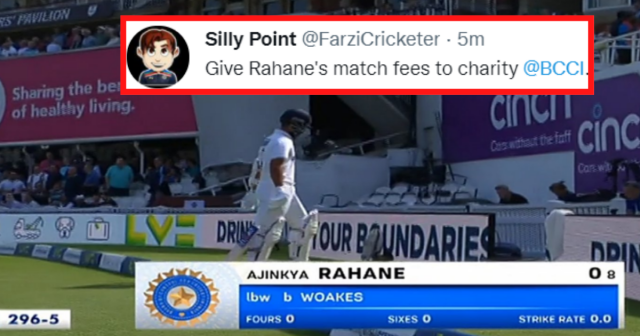 Chris Woakes first dismissed Ravindra Jadeja and broke a 55-run stad between the left-hander and the Indian skipper. In his very next over, he trapped Rahane on the back foot which was headed to the stumps. In his eight-ball knock. he was already saved once by the DRS when the ball just missed the stumps but it hitting the second time round.

After finishing the third day strongly, India started on the backfoot by losing two quick wickets. The sun is also out which was not the actual prediction for the day’s play and the ball has just did enough. Both Jadeja and Rahane played down the wrong line of the deliveries.

The Indian vice-captain’s spot is in question now after his run of poor scores in the series so far. Former Indian batsman VVS Laxman pointed out the fact that his confidence would be almost gone with him seeing Jadeja promoted above him in the batting line-up. Rahane has just scored 109 runs from seven innings at an average of 15.57. Barring 61 in the second innings of the Lord’s Test, Rahane has hardly scored runs for his team.

Rahane goes for a duck. Misjudged a length v Woakes, was saved by extra bounce. Played right across and was plumb in front. Looks out of touch. This was an excellent opportunity to get back in form. India will still need another 75-100 runs to put pressure on Eng on flat pitch

Rahane’s cup of woe overflows and also puts India in some trouble. Two wickets lost in successive overs from Woakes, lead still not past 200. England have come back into the match

#INDvENG
Rahane is in such poor form that next match one more bowler will be replaced.

Ajinkya Rahane is dismissed LBW by Chris Woakes on 0. He continues a lean run of form. #ENGvIND

Rahane sahab only consistent batsman in this team. Pitch, condition doesn't matter to him. Shit everywhere 👏👏

Wagon wheel of ajinkya rahane in this series #ENGvIND#INDvENG pic.twitter.com/Ajg1le4kPr

A look at Rahane's last 5 years in Test cricket reveals the problem. He has had just one good year (2019) and that honestly shouldn't be enough to keep him in the side. To think that India can't find a better batsman is just not believable. pic.twitter.com/4WyWGwC8cA

If Ajinkya Rahane was in Lagaan can you imagine the tax rates?

Ajinkya Rahane has been out five times to seamers this series. The previous four deliveries were all balls which seamed away, outside off stump – today was the first time he's been done by a nip-backer on tour. #ENGvIND pic.twitter.com/n4BSLh1zef