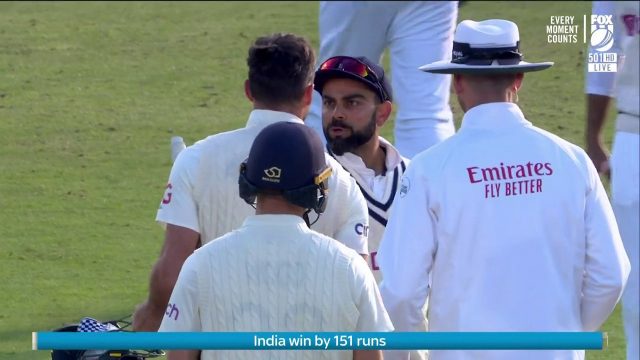 Team India’s fielding coach R Sridhar has thrown some light on the much-debated exchange between the Indian team and James Anderson during the 2nd Test at Lord’s. The incident transpired on day 3 when Jasprit Bumrah unleashed a barrage of bouncers against Anderson.

The veteran English quick said something in return after getting dismissed which saw tempers flying at Lord’s. Highlighting the same, R Sridhar stated that Bumrah went to apologise to James Anderson at the end of the innings, which was refused by the England pacer. The fielding coach said that the refusal really irked the Indian cricketers.

“After the innings, the boys were walking back to the dressing room. Bumrah walked past Jimmy and patted at him, so as to tell him that it wasn’t intentional. Bumrah had gone to talk to him and end the matter, but Jimmy brushed him aside.

“That got the team together. Not that the team wasn’t together before. It sparked/ignited a fire in everyone. The effect of that was visible on day 5,” explained Sridhar.

It was not intentional from Jasprit Bumrah: R Sridhar on bouncers to James Anderson

R Sridhar further added that Jasprit Bumrah had no intentions to hurt James Anderson and that it was a tactic to attack England during the fag end of the day. Anderson looked in utter discomfort against the bouncers before Mohammed Shami cleaned him up with a fuller delivery.

“Bumrah is a competitive fast bowler but wouldn’t want to intentionally hurt anyone.

“Bumrah bowled 8-10 balls. Yorkers, bouncers. Anderson was uncomfortable but somehow didn’t get out… There was an unwritten rule among fast bowlers’ club previously. You shall not bowl bouncers. Bowl full ones and get the other out. It was an understanding. Now that club is gone,” added Sridhar.