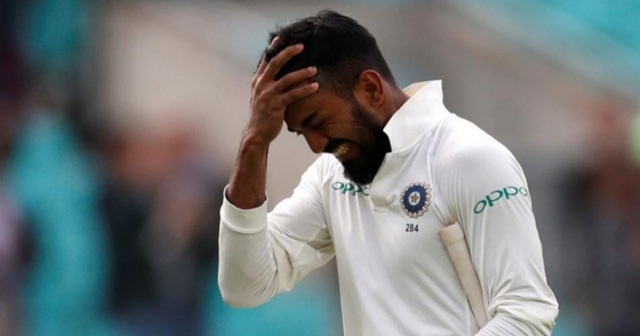 Team India opener KL Rahul has been fined by the International Cricket Council (ICC) for violating the Code of Conduct on the third day of the ongoing fourth Test match at the Oval.

Meanwhile, KL Rahul and Rohit Sharma stitched an opening partnership of 83 runs in the Indian second innings against England at the Oval, giving the team a strong start. Rahul fell just 4 runs short of his half-century as he edged James Anderson’s delivery to the wicketkeeper Jonny Bairstow.

50-run partnership comes up between our openers.

After an original not-out verdict, the decision was overturned following a review by England players, with replays revealing an edge off the bat. KL Rahul, on the other hand, was not convinced by the fact that he had been given out. Rahul thought his bat had hit the pads, but the UltraEdge replays revealed that it had not.

KL Rahul was dissatisfied with the judgment and expressed his displeasure to the on-field umpires about the same.

KL Rahul has been fined 15% of his match fee by the ICC for showing dissent at the umpire's decision after being given caught-behind on DRS review on day three at The Oval.

In addition, a demerit point has been added to his disciplinary record #ENGvIND pic.twitter.com/XSs0ZTOWs1

Rahul was found guilty of violating Article 2.8 of the ICC Code of Conduct, which is related to players and player support personnel “showing dissent at an umpire’s decision during an International Match.”

As a result of his violation of Level 1 of the ICC Code of Conduct, Rahul has been penalised 15% of his match fee. A minimum punishment of an official reprimand, a maximum penalty of 50 percent of a player’s match fee, and one or two demerit points are imposed for Level 1 violations.

Because it was KL Rahul’s first offence in a 24-month period, one demerit point will also be added to his disciplinary record. There was no need for a formal hearing because Rahul accepted the charges made by the officials.

On Saturday, India grabbed command of the fourth test against England at The Oval, expanding their lead to 171 at stumps on day 3 after Rohit Sharma hit his first Test century away from home. India were 270-3 when the game was called off due to poor lighting.