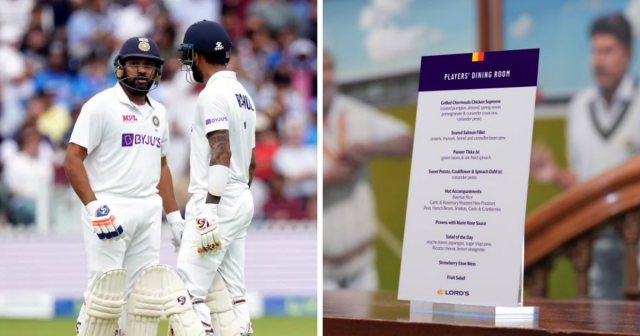 England faced India in the second Test match of 5-match series at, Home of Cricket Lord’s, London. Meanwhile, the first Test which was played at Trent Bridge Nottingham between the teams ended in a draw. Also, Both the teams were entering the second match at Lord’s with few changes in the playing XI.

Meanwhile, the official Twitter account of Lord’s Cricket Ground shared the menu for the lunch for Day one of the Test between India and England. There was plenty of variety as there were a total of 9 options available in the player’s dining room.

“A look at the Players’ Dining Lunch Room menu for Day One Eyes. What would your choice be? Thinking face”

💔 That was test match batting of the highest quality that too in testing conditions. Well played @ImRo45 👏🏻 #ENGvsIND pic.twitter.com/amZ5rBtHmR

The India opener Rohit Sharma once again delivered a good performance with the bat. Overall Rohit has been contributing runs consistently for India in the longest form of the game. At the home, he is arguably the best batsman for India in Test in recent times. However, in overseas conditions, Rohit Sharma has been criticized for not converting a good start into a big score.

Meanwhile, things were completely different in the 2nd Test against England at Lord’s. Rohit Sharma had an amazing century partnership with KL Rahul. Rohit Sharma scored a brilliant half-century and was heading towards his century.

He got out after a well-made 83. Currently, Rahul and Virat Kohli are at the crease and will look to stage a big partnership.