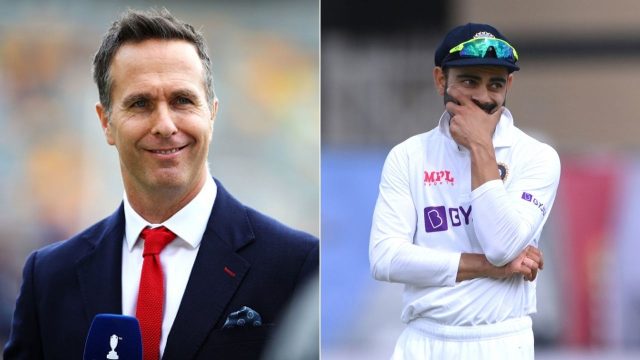 Virat Kohli’s slump in his batting form has got the entire cricket fraternity talking. The recent former cricketer to comment on his pale form is former England skipper Michael Vaughan. His comments came in after Virat Kohli was dismissed outside the off-stump by Sam Curran in an identical manner to which he has been dismissed previously. Kohli scored 42 and 21 in the Lord’s Test after starting the series on a first-ball duck.

“Really good bowling, not good batting. Virat Kohli is a better player than that. When he had success in English conditions, he knew exactly where his off-stump was. His trigger movement goes over to the off-stump and he knows where it is,” Vaughan said on BBC’s Test Match Special podcast.

Huge moment in the game as Sam Curran finds Kohli’s edge with one seaming away.

Virat Kohli Seems To Have Lost His Off Stump: Michael Vaughan

Vaughan further suggested that Virat Kohli needs to get aligned with the ball and needs to play with the bat close to his body. The England bowlers have been successful so far in making Kohli fetch the balls outside the off-stump.

“So far in this series, I just wonder whether he lost his off-stump because he is going over quite a long way and his head is going with him because of that, I think he thinks his off-stump is around the fourth and fifth stump line. He needs to get back into alignment,” Vaughan said.

Meanwhile, England are batting at the moment chasing 276 runs to win. They have already lost their openers with their skipper Joe Root out in the middle with Haseeb Hameed. The Indian bowler are making things as difficult as possible for the duo at the moment. India have won just two Test matches at Lord’s, the last of which came in 2014 courtesy of Ishant Sharma’s best spell in Test cricket.