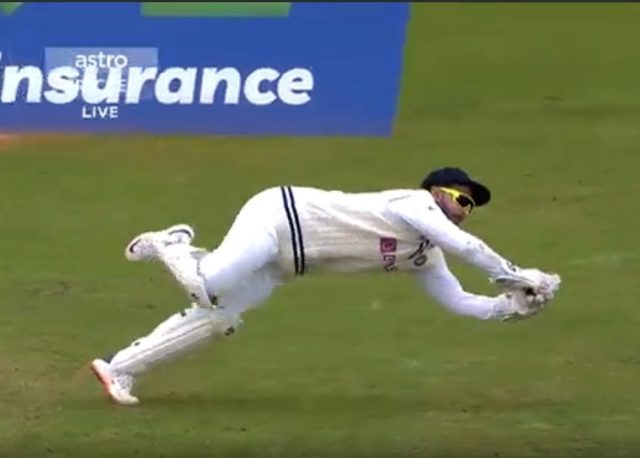 The first test match between England and India is underway at Trent Bridge, Nottingham. India’s wicketkeeper Rishabh Pant took an outstanding catch to dismiss Dominic Sibley in the second innings.

India’s pacer Jasprit Bumrah bowled a delivery wide outside off stump which Sibley instinctively tried to play at the ball and poked it behind the stumps. The ball flew to Rishabh Pant’s left who dived to complete a splendid catch. Sibley’s stay at the crease ended after 133 balls, scoring 28 runs.

OUT! BUMRAH STRIKES! 🔥
The partnership has been broken! Sibley departs for 28!

The England team is in a spot of bother having lost their top three for 135. Rory Burns was dismissed by Mohammad Siraj in the fifteenth over of the innings as Burns nicked a delivery to the wicket-keeper Rishabh Pant. Soon Zak Crawley followed Burns back to the pavilion after he edged a delivery in Jasprit Bumrah’s over.

In the first innings, India scored 278 runs and took a 95 run lead after bowling England out for 183. KL Rahul scored 84 runs off 214 deliveries including 12 boundaries, while Ravindra Jadeja hit 56 runs off 86 balls, including 8 boundaries and a six. Tail-enders Mohammed Shami and Jasprit Bumrah also made valuable contributions batting lower down the order.

England is 62 runs ahead in the match with skipper Joe Root well set scoring a 76* off 104 deliveries, along with Jonny Bairstow.