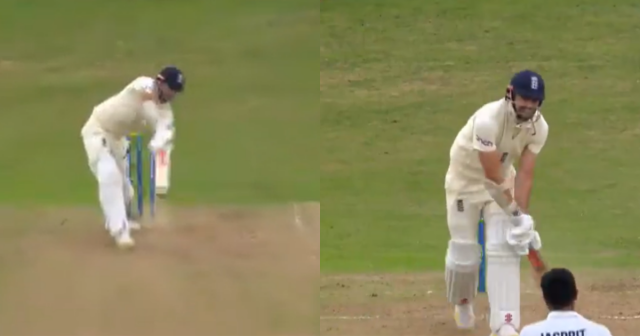 Jasprit Bumrah took the last wicket to fall for England as he castled James Anderson for one. He scored 1 of 11 balls ans was dismssed after surviving a close call in the previous delivery from Bumrah. England was finally dismissed on 183 after Anderson and Sam Curran added 23 runs for the final wicket.

Jasprit Bumrah bowled a yorker the ball before Anderson was dismissed. He was ruled out by the onfield umpire but was saved by the DRS. Bumrah bowled a pinpoint yorker on the very next delivery, this time breaching through the defence of Anderson.

Earlier in the day, England skipper Joe Root won the toss and opted to bat first. He scored 64 off 108 balls but lost wickets at the other end. Root added 72 runs with Jonny Bairstow who scored 29 off 71 balls.

There were a lot of talks about India looking to bat first after winning the toss. Virat Kohli lost his 35th toss as captain as his bad luck with tosses continue.

This series also kickstarts the second cycle of World Test Championship from 2021-23. India lost their last Test series in 2018 in England. England then lost a Test series earlier this year 3-1. The pitch has been a good one for batting so far with the bowlers getting enough assistance as well. It has shown consistent seam and swing to add to the pace generating off the track.