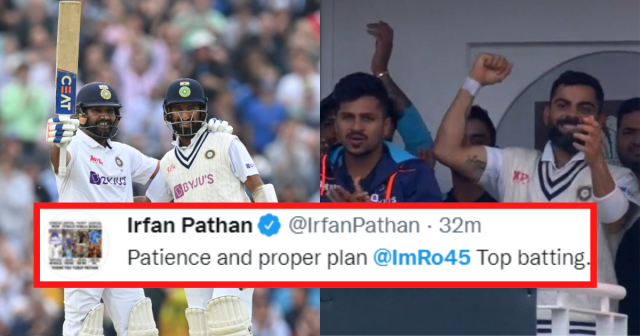 Rohit Sharma brought up his eighth Test ton and his first Test ton overseas on day 3 of the Oval Test. After a watchful start on th final session on day 2, he cashed in on the third morning bringing up his first hundred of the series. It was the second hundred by an Indian batsman on this trip. In the process, he also brought up a century stand with Cheteshwar Pujara who himself has looked solid and compact.

India started the day on 43 for no loss and is now inching close to 200 runs in their second innings. The conditions are much better for batting and the Indian top-order has cashed in on the opportunity.

On 94, he hit Moeen Ali for a six straight over long-on tp bring up his 100. His teammates at the balcony stood up and applauded the batting heroics of Rohit.

First century outside India for the Hitman! 🔥
He gets there with a monster six over long on!

The transformation of #RohitSharma into a world class opening batsman has been staggering. This century was inevitable given the way he has batted in this series. Privileged to see this. Class.

A top class innings from a high class player. Take a bow #RohitSharma .
Could well be a series defining innings.
Come on, let’s get a big lead. pic.twitter.com/2M48YepWO2

Rohit Sharma. Mind over matter. What an exceptional transformation of a naturally aggressive player!!! A great example of how Nurture is often more important than Nature. #EngvInd

Oh yeahhhhhhh SHAM ❤️ love that brotherman.
What a time to do it 🥳 #Hitman#ENGvIND pic.twitter.com/WY3y7Zpmo5

Wonderful knock by Rohit, not only will decide the fate of this match but also the test series! #INDvENG #RohitSharma

This was always coming: a Rohit Sharma hundred outside India. And after all that magnificent circumspection, it came with with a signature stroke

Special innings from @ImRo45 !! He has so much time to play his strokes .. England look doomed .. #ENGvIND

Rohit Sharma since being promoted as an opener in the World Test Championship has looked the most composed among the Indian Test batter at both home and away.

His batting has been one of the big reasons why India have not missed the run drought of the Indian middle-order.