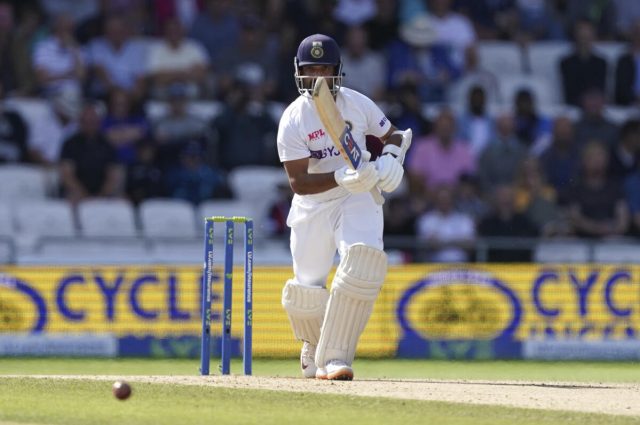 India left Day 3 of the third Test against England at Headingley in a strong position. As the Virat Kohli and co. was at the score of. 215/2 and they were trailing by 139 runs. Also, Test Specialist Cheteshwar Pujara was batting at 91* and Indian captain Virat Kohli was at 45* with Vice Captain Ajinkya Rahane and wicket-keeper Rishabh Pant yet to bat. Fans expected that India will have a strong start but the complete opposite happened.

India started Day 4 of the Leeds Test in the worst possible manner. As India had the bizarre first hour. They lost Cheteshwar Pujara at the overnight score of 91 and Virat Kohli at the score of 55. In both cases, the man responsible for the wickets was Ollie Robinson. Meanwhile, after the good show of Kohli and Pujara, there was a big responsibility on the shoulders of Vice Captain Rahane. However, he delivered nothing for India with the bat as he was dismissed by James Anderson at the score of just 10.

Also, this was 8th time in Test cricket where Rahane lost his wicket against Veteran James Anderson. Notably, this was the consecutive failure of Ajinkya Rahane as he got out on the score of 18 in the first innings and 10 in the second innings.

Indian Test vice-captain has so far crossed the 20 runs mark only one time in this series against England. Also, several questions have been raised against the inclusion of Ajinkya Rahane in playing XI after his continuous failure.

Bad to worse for Team India as Anderson gets Rahane's wicket.

Here is How Twitterati reacted to the poor performance of Ajinkya Rahane in the Headingley Test against England:

Since the start of England series in 2016, Rahane has averaged 33.77 in 48 Tests – which is roughly two-thirds of his career.
No other Indian top or middle batsman in the last 31 years have averaged under 35 across a 48-Test stretch in his career.#ENGvIND

Rahane is gone. Quite the start for England. And that’s 400 home Test wickets for Jimmy Anderson. #ENGvIND

The master Anderson, he deserves that wicket, gets Rahane and India 239 for 5 in the second innings.

India lose Pujara, Kohli and Rahane within the first hour to poor shots, or as in Pujara's case playing no shot. Maybe it's time to give an opportunity to Vihari who has been warming the benches if the vaunted trio can't negotiate Anderson after so many tours #indiavsEngland

Right bro ….Rahane ko out karo team se … another wicket pant has gone back to the pavilion

I must say Indian commentators including Harsha Bhogle, Ajay Jadeja saba karim would never admit that Virat Kohli or Ajinkya Rahane is playing poorly; instead they would say anything but to criticize their batting.#Cricket#EngvIND#INDvENG

Rahane after Playing one good knock in a series. pic.twitter.com/9ewaBv4AEI

Virat kohli and Rahane surely needs a break. Not my captain and vc who can't lead a team from front in such matches.

Not a great first hour for #TeamIndia on Day 4️⃣

Ajinkya Rahane has been dismissed caught behind for 10.

Rahane departure was last nail in the coffin.
Its too much for tailenders now.
Robinson
Pujara
#ENGvsIND pic.twitter.com/APom7GOnoy

Pujara wasn't looking good since the beginning.
Kohli looked good in the first half hour where he left really well, then got desperate for runs, hence the wicket.
Rahane looked handicapped as always against the new ball.#ENGvsIND

This mode of dismissal, again and again…
Someone play it on loop and show it to him.
Rahane is not batting like someone who's on his third tour to England.
Why does he make that forward trigger movement in these conditions? Opens up the LBW option too.#ENGvIND #ENGvsIND

Both Rahane & pujara don't Perform , when they're on the verge of being dropped , they play one good innings to secure their place for the next 5-6 matches. Both should be dropped. You can't have players like Agarwal , Vihari & SKY warming the bench.

Rahane, you'll always be one of my favorite batsmen, but pic.twitter.com/IAaKklzaij

Rahane needs to be dropped. Too many chances and too few big runs.

Pant should show some responsibility

India stands on the verge of losing the third Test against England. Notably, Rishabh Pant was also bashed by fans as he scored 2 runs in the first innings and 1 in the second innings.