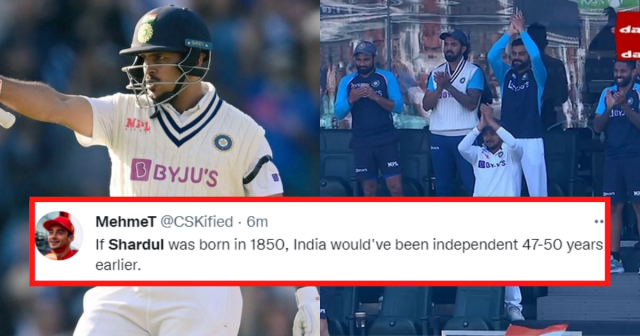 Shardul Thakur scored his second consecutive 50 of the Test match and his fourth fifty of his career. With India losing three early wickets in the first session, Thakur came in and consolidated after a watchful start. In the process, he added a hundred-run stand with Rishabh Pant who himself has also surpassed a fifty.

India, have now extended their lead over 300 with England picking up Shardul’s wicket just after he reached his fifty. the Indian all-rounder walked out to the wicket after the fall of Indian skipper Virat Kohli for 44. After coming in, he looked positive from the start and with Pant at the other end added exactly 100 runs for the seventh wicket.

Finally, it was skipper Joe Root who dismissed him by getting him caught at slips. Kohli too was dismissed in the slip cordon while trying to defend a ball that spun from Moeen Ali.

End of a brilliant, entertaining innings from Shardul! 💔

These two wickets have given enough proof that the wicket has started to turn and these are ominous signs for the England batters.

Shortly after Shardul Thakur, Pant also was dismissed by Moeen Ali who earlier took Kohli’s wicket. After a 100-run stand between Pant and Shardul, India lost two wickets in a space of two runs.

The wicket have started turning since the dismissal of Kohli. The wickets of Thakur and Pant have affirmed the same with the fourth innings yet to be played out.

Lord Shardul: Shardul Thakur Trends Again On Twitter After Back To Back Fifties

Turned the game with a half century in Australia

Turned the first innings with a half century at The Oval

Turned the second innings with a half century at The Oval

What India missed out on Hardik Pandya we are getting it in Shardul Thakur ! #allrounder

Shardul Thakur, yet another outstanding fifty. His back to back one in this Test, what an all rounder. pic.twitter.com/VRfelqTNin

Lord Shardul Thakur brings up his 50! His second half century in two innings. He’s dominating the English bowlers! The Lord is dangerous 🔥 #ENGvIND

India’s lead has now moved ell above 300 with the tailenders starting to frustrate England after the lower-middle order.