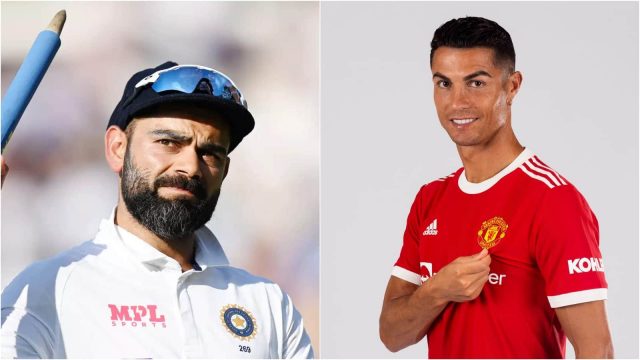 Team India led by Virat Kohli has already reached Manchester for the fifth and final Test match against England. India are leading the series 2-1 courtesy of their win in the last game at The Oval. The Indian skipper is likely to meet Portuguese superstar Cristiano Ronaldo sometime this week in Manchester. Meanwhile, Ronaldo is coming back to Manchester United 12 years after leaving the club.

CR7 is likely to play his return game against Newcastle United on Saturday The match starts at 7.30 pm IST. Meanwhile, the football fans are gearing up for the big event of Ronaldo’s return to the club from where he started his journey to becoming A G.O.A.T (great of all time).

During these 12 years of leaving the English club, he has played for two other popular clubs in the world of football. He played for Real Madrid for nine years before making a move to Italian giants Juventus in 2018.

The city of Manchester is buzzing at the moment due to the presence of two of the finest sportspersons of this generation Cristiano Ronaldo and Virat Kohli and looking towards their likely meeting.

Indian skipper Virat Kohli has always shared his admiration about the United legend. Ronaldo recently became the player with most international goals in a recent World Cup qualifier fixture against Ireland.

In an interaction with Indian football skipper Sunil Chettri, Kohli spoke about why he admires Ronaldo.

“Cristiano Ronaldo. There are many great athletes. There are so many people you look up to, who are amazing, but for a guy to turn up for big games that regularly. The thing that stood out was, he joined Juventus (and) I remember it was a UEFA Champions League match between Juventus and Atletico Madrid match. They lost 2-0 in the first leg. The second leg they were playing at home. For a guy to say two days prior to the game, to tell his friends that come for the game (because) it is going to be a special night. That conviction for a guy to say that we are going to go through and score a hat-trick. That for me is a beast mentality. In the world of sport, there are very few people who can claim to have that kind of a mentality. That mental strength for me is inspiring every time” said Virat on Ronaldo.