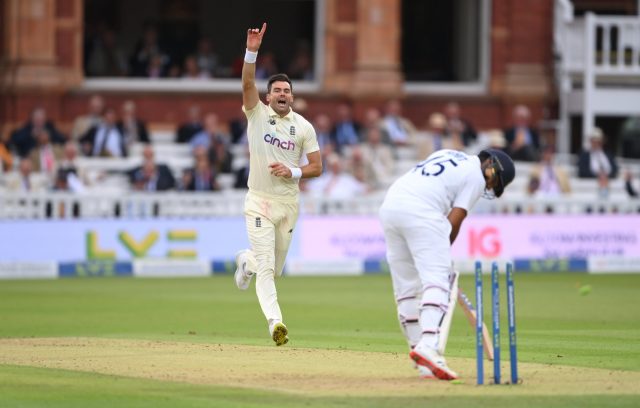 India’s opening batsman Rohit Sharma missed out on a well-deserved hundred in the second test match against England at the Lord’s cricket ground, London.

England won the toss and asked the Indian team to bat first. Rohit Sharma started off the innings quietly. He flicked a full leg-side delivery by Sam Curran for the first boundary of the test match in the thirteenth over. The opener did not look back from then, he quickly raced to his fifty off 83 balls. Soon, he hit the first six of the test by taking on Mark Wood’s short ball.

Closing on his Hundred, in the forty-fourth over, Rohit Sharma was clean bowled by James Anderson. The pacer bowled an outswinger on the previous delivery to set up the dismissal. An inswinging delivery, next ball, hit Rohit Sharma’s thigh and went on to rattle the stump. The opener batted well for his 83 runs off 145 balls, including eleven boundaries and a six but could not convert it into a century.

Cheteshwar Pujara joined KL Rahul at the crease after the fall of Rohit Sharma’s wicket. This will be crucial innings for him as he is under pressure to score runs. Pujara has been on the receiving end of the criticism for his inconsistent run at the International level in the last few matches. He averages just 29.23 in nine test matches played scoring 380 runs, this year.

Meanwhile, KL Rahul has continued his good form in the series. He is batting on 47 runs off 129 deliveries, holding on the innings from one end as Rohit Sharma took the charge from the other. India is 141 for one down and will look to consolidate on the start given by both the openers.