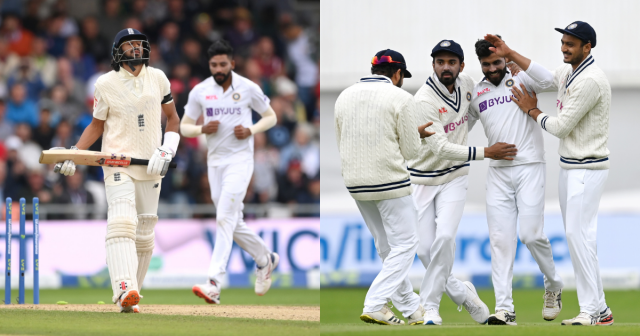 Ravindra Jadeja has finally made an impact in the Test series as he castled Haseeb Hameed with a great spinning delivery. India dismissed both the openers in the first session. The dismissal of Hameed however will be a standout performance as the pitch has shown no help for spinners so far in the series. Both the openers made India restless for a wicket and Jadeja has provided the wicket just at the right time.

Hameed so far was very watchful in his innings but once he was beaten through his defence. He bowled from around the stumps with the ball pitching in the off stump and going onto hit the wickets beating the bat.

England is a place where even spinners produce jaffas
Jadeja gets his first wicket of the series!

This was also the longest wait for a wicket by an Indian spinner. Ravindra Jadeja got his first wicket after 41 wickets fell over the period of two Test matches The previous longest was against Pakistan in 1989/90 when the first wicket to spin came in the 3rd Test of the series after 25 dismissals.

It was a smart move from Indian skipper Virat Kohli to bring on Jadeja seeing the footmarks. Hameed playing inside the line of the ball which turned just that little bit and managed to beat the bat of Hameed.

Hameed and Rory Burns earlier added a 135-run opening stand. Their partnership made the Indian bowlers tired and restless at the same time. Jadeja struck just before lunch as the wicket came at the right time. Kohli spoke about Jadeja playing a far more important role in this Test than he did at Lord’s.

Hameed’s dismissal brought out England skipper Joe Root out to bat. He is the highest run-getter in the series so far and is closing in on 400 runs in the series.