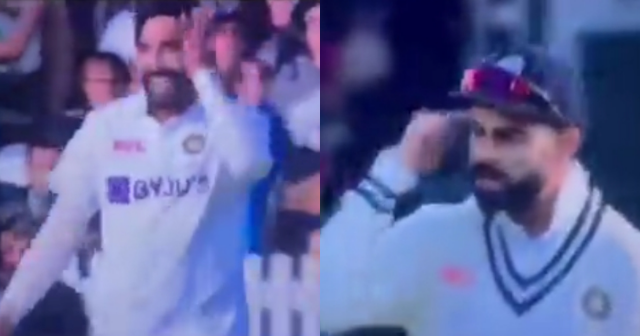 The second Test match between India and England at Lord’s, London was a nail-biting and thriller encounter, the match was filled with heated exchanges and Verbal banters between several big players. However in the end India had the last laugh as they were able to clinch a victory by 151 runs. Meanwhile, one clip of Virat Kohli and Mohammed Siraj has been circulating on social media, in which they were doing some gesture when James Anderson came to bat.

One of the heated banter of the match was between arch-rivals, James Anderson and Virat Kohli. During Day 4 of the match, the Kohli-Anderson banter took place and they were seen exchanging words when Kohli was on the non-strikers end. Meanwhile, in the going viral on social media Kohli and Siraj were seen pointing towards James Anderson. Moreover, as Anderson came to bat at no.11, Siraj and Kohli were seen putting their hands on the forehead. The most probable meaning behind this gesture would be a warning for Anderson that he could receive some more short-pitched deliveries. 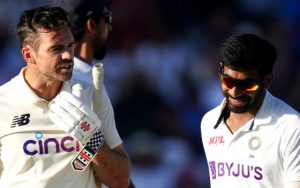 Meanwhile, In the 125th over of the first innings of England pacer, Mark Wood got run out. After that James Anderson came to bat for England at no.11 position. Also, Indian pacer Bumrah came to bowl his spell in 126th over the match. He soon went aggressive against the England tailender and bowled some fierce deliveries. Bumrah went on to deliver a nasty bouncer against Anderson which hit his helmet and led him to get checked for a concussion. Also after that Mark Wood and other English pacer launched an attack on Bumrah when he came to bat in India’s second innings.

“Emotions ran high, there’s no doubt about it. I mean, obviously, they targeted Jimmy (Anderson) in that first innings. And we went back hard at them as well, we tried to go toe-to-toe with them. The one thing I will say is that the competition was created with what happened to him. We put a lot of fire in our belly for Day 4 as well.”