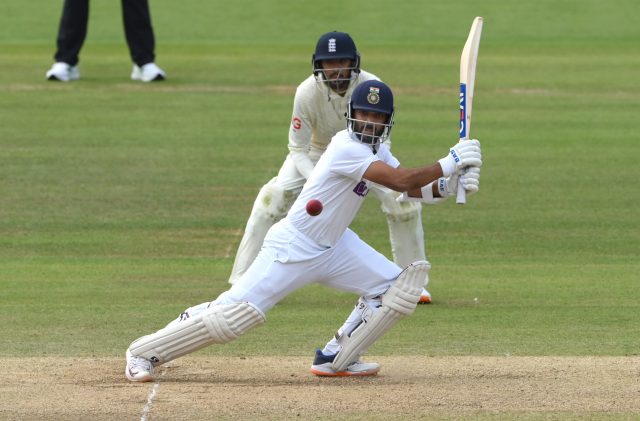 Former India opener Virender Sehwag lauded Ajinkya Rahane’s gritty knock against England in the second Test match at Lord’s. Rahane faced severe backlash coming into the match owing to his inconsistent run at the International level. Before this test match, he averaged 19.21 in fourteen innings, scoring just 269 runs this year.

The Indian vice-captain walked in at the crease when India was in a spot of bother having lost their top three for 55 runs. He partnered along with Cheteshwar Pujara to put up a 100-run stand for the fourth wicket. Speaking on Sony Sports Network, Virender Sehwag spoke about Ajinkya Rahane innings.

He stated that Rahane will not be happy, but satisfied with his 61-runs knock. Sehwag said, “He played a really good knock. He had luck on his side as he got dropped on 39 but would be satisfied with his innings. Not happy off course but he will be satisfied after getting 60 odd runs to his credit. Had he converted that fifty into a century, he would’ve been happier.”

Further, Virender Sehwag recalled India’s Test series win against Australia, under Rahane’s captaincy. He added that Ajinkya Rahane is often criticized, but we should not forget his performance as a batsman and a leader in the Australia series.

“I must say that we criticize him often. We shouldn’t forget the series triumph in Australia. He scored a hundred in Melbourne after India was all-out for 36 in Adelaide. India won at MCG, drew in Sydney, and won in Brisbane. I feel the series win in Australia is the biggest overseas win and it was under Rahane’s leadership. We criticize him a lot but we had our greatest Test series win under his leadership,” Virender Sehwag concluded.