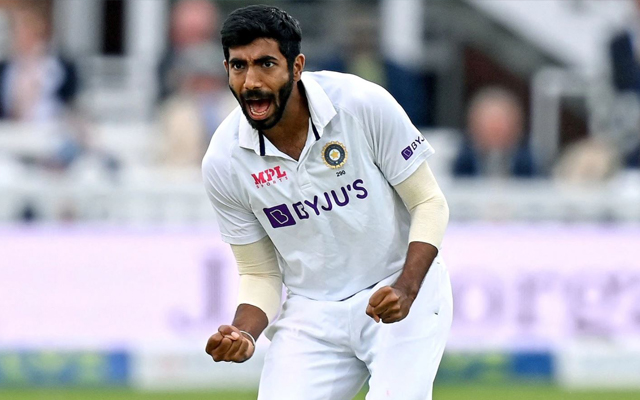 Indian skipper Jasprit Bumrah has led the team from the front in the ongoing fifth Test match against England at the Edgbaston in Birmingham. He has contributed with his all-round performance in the match so far. On Sunday, he took three wickets for sixty-eight runs in the innings, to push England on the backfoot. With this three-wicket haul, he set a record for Indian bowlers in England Tests.

Jasprit Bumrah dismissed the top three England batters, Alex Lees, Zak Crawley, and Ollie Pope in the innings. At the end of England’s first innings, he has 21 wickets in five Test matches in the series. The first four Test matches took place last year. The fifth was rescheduled to July 2022 as the Indian camp was hit with the covid-19 virus.

The Indian skipper became the highest wicket-taker for India in a Test series in England. Earlier, the record was with Bhuvneshwar Kumar, who took 19 wickets on India’s tour of England in 2014. The other names in the top five are Zaheer Khan, Ishant Sharma, and Subhash Gupte. Bumrah also broke the record for most wickets in the first 30 Test matches by an Indian bowler. He has 126 Test wickets at an average of 21.75.

Jasprit Bumrah has taken the most wickets in the first 30 matches for India in Test history among fast bowlers. pic.twitter.com/Ie3RSkWlZY

Earlier in the match, Jasprit Bumrah slammed 31 runs off just 16 deliveries. His knock included four boundaries and a couple of sixes. He slammed Stuart Broad for 29 runs in one over, setting a new record for most runs scored in a single over in Test cricket. He broke Brian Lara’s record of 28 runs, which the West Indies batter scored against South African bowler Robin Peterson.

India in a commanding position at the end of day three

The Indian team has a lead of 257 runs at the end of day three of the fifth Test match against England. They are 125 for the loss of three-wicket in their second innings. Earlier on day three, the visitors bowled out England for 284 runs to take a 132 runs lead. Mohammed Siraj was the pick of the bowlers with 4/66.

Meanwhile, Indian batter Cheteshwar Pujara will resume the Indian innings on day four of the Test match. He is unbeaten on 50 runs, along with Rishabh Pant at a score of 30 runs overnight.