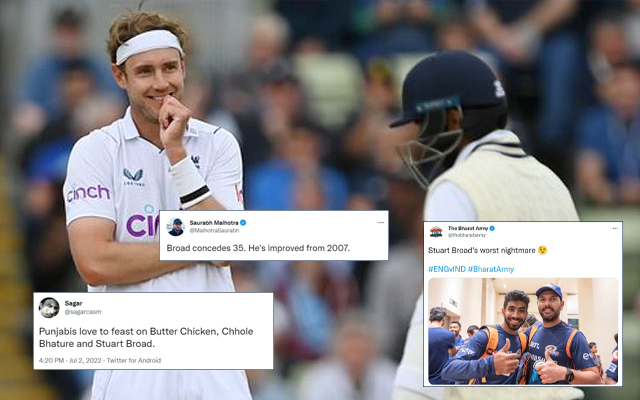 England cricketer Stuart Broad had one of the worst outings of his career on the cricket field on Saturday, July 2 against India in the fifth Test match at the Edgbaston in Birmingham. The pacer was at the receiving end of Jasprit Bumrah’s exploits in the first innings of the match. He conceded 35 runs in the over, registering a new record in Test cricket.

Indian skipper Jasprit Bumrah took the attack to Stuart Broad in the eighty-fourth over of the innings. He slammed four boundaries and a couple of sixes, including one on a no-ball in the over. Broad also conceded five runs off a wide delivery on the second ball of the over. This marked a new record for the highest runs scored in an over in Test cricket.

BOOM BOOM BUMRAH IS ON FIRE WITH THE BAT 🔥🔥

Back in 2003, Brian Lara had slammed 28 runs off Robin Peterson’s over in Test cricket. Stuart Broad’s 35-runs over sparked a meme fest on social media. The fans trolled the England bowlers for achieving this “unwanted” record”. They also reminded Stuart Broad of the 2007 ICC T20 World Cup, when he was hit for six sixes in an over by Yuvraj Singh.

Let’s take a look at how Twitterati reacted:

Sad to lose my record today 😜 oh well, records are made to be broken I guess. Onto the next one 🏏 #ENGvIND

Stuart Broad after facing the assault from Bumrah- 35 in an over.. haha pic.twitter.com/68kQft72SM

Stokes to Broad – Will you bowl to Bumrah again in #INDvsENG?

Jasprit Bumrah batting against Stuart broad be like pic.twitter.com/bVqlrGCYsF

~Name of Stuart Broad’s biography by an Indian

Stuart Broad had 36 in color, now has 35 in whites too .. all thanks to captain Boom Boom #Bumrah 🔥#INDvsENG pic.twitter.com/9EUpB0V4dR

Veteran England pacer James Anderson believes Stuart Broad was unlucky against Jasprit Bumrah in the 35-run over during the fifth Test match on Saturday. He reasoned that on any other day, the top edges would have gone to a fielder. However, in this case, it did not happen that way.

“Yeah, [it is] just one of those things. On another day one of those top edges goes straight to hand. If that gets taken nobody talks about the over. I thought it was pretty unlucky. There’s plenty of top edges, a couple of good shots but that’s the plan Ben (Stokes) wanted Broady to go with. Broady stuck to it and on another day when the luck was with Stuart an edge probably would have gone to hand.”