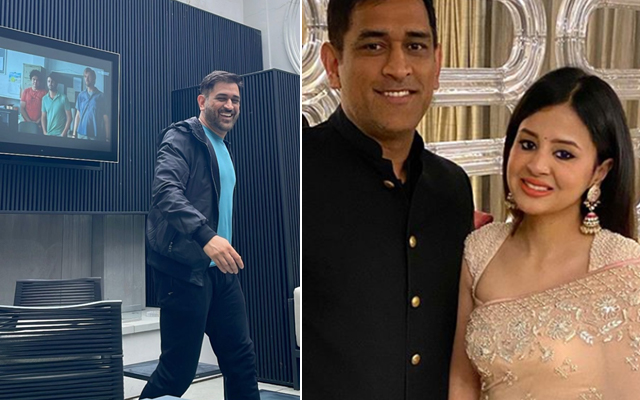 Former Team India skipper MS Dhoni has flown to the United Kingdom (UK) with his family ahead of his 41st Birthday. His wife Sakshi Dhoni took to her social media account to post a picture of MS Dhoni in London. The post has been shared widely by his fans on social media. The wicket-keeper will be celebrating his 41st birthday in less than a week’s time on July 7.

MS Dhoni took retirement from international cricket on August 15, 2020. He is not very active on social media. However, his wife Sakshi often shares pictures giving a sneak peek to the fans of their daily lives. In one of Sakshi’s Instagram stories, she posted a picture of MS Dhoni in London, wearing an ocean-blue shirt along with a dark blue jacket and black jeans.

The wicket-keeper batter was retained by the franchise for INR 12 crores ahead of the 2022 mega-auctions. In fourteen matches, he scored 232 runs at an average of 33.14 and a strike rate of 123.40. Dhoni had handed over the captaincy post to Ravindra Jadeja before the start of the IPL season. However, following a disastrous start to the tournament, he had to take up the responsibility again as Ravindra Jadeja stepped down.

MS Dhoni to continue playing for CSK in IPL 2023

MS Dhoni will continue playing for the Chennai Super Kings in the Indian Premier League. He confirmed that he will lead the team in the 2023 season of the tournament. The wicket-keeper batter further added that it will be unfair to not play his last game in Chennai’s M. Chidambaram Stadium.

“Definitely, I will play next year. It would be unfair to not play in Chennai. It won’t be nice to the CSK fans. Whether 2023 will be my last year or not, that is something we will have to see,” said MS Dhoni.