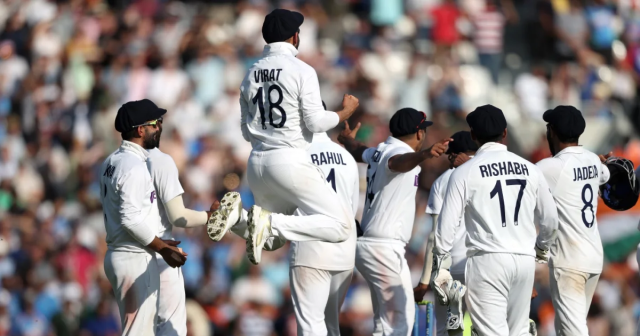 The third Test at Headingley ended in a devastating innings defeat for India. But now the World No.2 Test Team has produced a stirring recovery in the fourth Test, winning by 157 runs on the fifth day by defying all the odds.

In the last innings, India bowled out the hosts for a meagre 204 runs to secure the win. This is the first time in 50 years that India has won a Test Match at the Oval. With this victory, India now leads the five-match series 2-1. Skipper Virat Kohli led the team with elegance and was aggressive with his bowling changes.

India conquer The Oval – their first Test win at the venue since 1971 💪#WTC23 | #ENGvIND | https://t.co/zRhnFiKhzZ pic.twitter.com/aH7r53QMst

The bowlers may rightfully be considered the heroes of this triumph, as they put up a fantastic effort on a decent batting surface to enable India cross the finish line.

In this article, we look at the 3 moments that defined the Oval Test:

🇮🇳 on top!
Bumrah yorks Bairstow and Jaddu gets Moeen at short leg!

Jasprit Bumrah removed England’s two strong middle-order batsmen, Jonny Bairstow and Ollie Pope in the space of a few overs which strengthened India’s position in the match. Bumrah broke Pope’s defence and then knocked out Bairstow with a jaffa that slashed back sharply.

Jasprit Bumrah also set a new record by being the fastest Indian bowler to reach 100 Test wickets. Bumrah completed the feat in 24 Tests, one fewer than Kapil Dev, who had previously held the record with 25 Tests.

1️⃣0️⃣0️⃣ Test wickets for Bumrah! 💥
He shatters the stumps and gets there in true Bumrah style!

Root has been unstoppable in the series, scoring three hundred in a row. However, he was undone by Umesh Yadav who breached Root’s defence and that helped the visitors end the day on a strong note.

A back-of-a-length delivery from Yadav pitched outside the off-stump, came back in sharply with angle, and slammed into the stumps of Joe Root in the 16th over of England’s first innings. Umesh leapt up in delight after dismissing Root.

The wicket was definitely a turning point in the game, and Umesh received a lot of appreciation from the cricketing community for it. The Umesh Yadav delivery can also be referred to as “the ball of the series”

It should be noted that this was Yadav’s first Test since the Melbourne Test, which ruled him out of the Australia series during the World Test Championship’s inaugural edition.

With his second half-century in the match, Shardul once again exceeded everyone’s expectations with the bat. Shardul scored 60 runs off 72 balls, including seven fours and one six. Pant, on the other hand, faced 106 balls and scored 50 runs and complimented Shardul really well. It was a very different innings from Rishabh Pant as southpaw resisted the urge to race down the track and instead focused on the quality of each delivery.

For the seventh wicket, the pair added 100 runs which put India in a position where they could look for a victory. This effort by Thakur and Pant helped India finish with 466 runs. A target of 368 meant that it was always going to be difficult for the hosts to win the match.