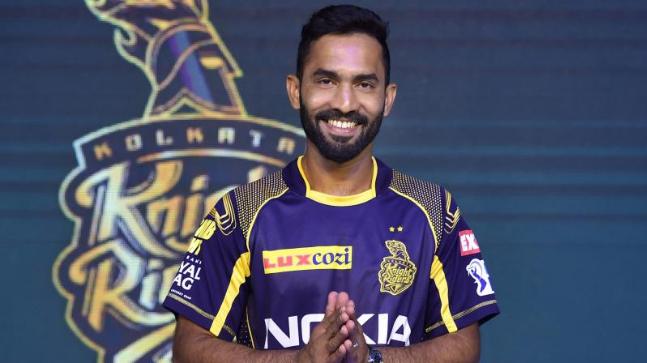 Around the same time yesterday, when Peter Handscomb and Shaun Marsh pulled off a ‘great escape’ from the jaws of defeat in the third Test of the ongoing Border-Gavaskar Trophy 2017 at JSCA, Ranchi, not far away at Firoz Shah Kotla, Delhi, the Tamil Nadu team edged out Bengal, to win the Vijay Hazare Trophy 2017.

Having overcome the semi-final hurdle, beating Gujarat, the previous edition’s winners, Tamil Nadu made ‘short-work’ of Bengal to win the title.

Tamil Nadu owe their win to the single-handed effort of Krishna Kumar Dinesh Karthik (DK), who kept up one end and scored runs with very little support from the other end, as wickets kept on tumbling.

The ‘Player of the Match’ took some time off to interact with me on his performance, his career, IPL and his approach.

Opening the discussion, he said, “Really feel happy for having won the Trophy, as a team, and also on my own performance. Happy to have been able to contribute positively for the victory.”

DK made his ODI debut and showcased his wicket-keeping talent with his electrifying stumping of Michael Vaughan off the bowling of Harbhajan Singh in the third Natwest Challenge Trophy, played on 5th September 2004, at Lord’s, just when Vaughan was getting dangerous, chasing a target of 205 runs.

Vaughan’s dismissal put a brake on the England onslaught and India eventually won the game by 23 runs.

The wicket-keeper batsman has been scoring big time in domestic circuits but with the advent of MS Dhoni in the international arena with huge success, DK was pushed to the back-seat and since then has been under the shadows of Dhoni.

On my straight question, as to where does he go from here, says Karthik, “I am supposed to be performing well and make every performance count. At this stage, I want to enjoy every time I step into the middle. I am not thinking too far ahead.”

While both DK and Mahendra Singh Dhoni made their ODI debut almost at the same time in 2004, DK made his Test debut one year prior to Dhoni.

However, it so happened, that Dhoni’s performance in ODIs attracted the attention of the selectors and he took the position of DK in the national squad.

Ask DK how difficult was it to lose his place in the national team, he says, “Yes, Dhoni was performing well and he rightfully deserved to be playing for the country. Now looking back I feel proud that my position was taken over by someone who later went on to become a legend of the game and won many laurels for the country. He has gone on to win the Championship Trophy, 50-over World Cup, 20-over World Cup and IPL titles also. So I really feel happy for Dhoni’s achievements.”

He goes on to add, “I have played many games alongwith him. I enjoyed playing as a pure batsman. There have been so many things that one could learn from him.”

Playing as a pure batsman and opener in the England series 2007 (Pataudi Trophy), featuring in 6 innings, DK had scored 263 runs at a decent average of 43.83 with 91 runs as his individual best. He had proved that he could also open innings successfully in ‘outside the subcontinent conditions’ but failed to capitalise on the same.

However, when Dhoni ‘called it quits’ midway through the series against Australia, played Down Under, the ‘men who matter’ decided to go with Wriddhiman Saha, since he was considered to be having better wicket-keeping skills.

During the recently concluded England series, early this year, the official wicket-keeper, Wriddhiman Saha got injured and the selectors brought in Parthiv Patel from ‘wilderness’.

Ask him whether he felt overlooked by the selectors? Says DK, “Actually, I was also injured during those days. I was playing a few games for Tamil Nadu (in Ranji Trophy) purely as a batsman. I was not keeping wickets. The selectors had watched some of my games and also had a discussion with the Tamil Nadu team physio. Then they had taken the call of bringing in Parthiv. I don’t feel I was overlooked.”

Ask him about his plans, he says, “I am concentrating on my game and have been improving my batting skills and score big at every available opportunity.”

Though Dinesh Karthik may be a tad dissatisfied at the way his international career has shaped, he would definitely be happy at the way he has performed in IPL.

‘IPL has been a great learning experience,” says the Tamil Nadu batsman. “One gets to rub shoulders with the who’s who of world cricket and gets to learn the nuances of the game from the stalwarts from close quarters.”

He goes to add, “IPL platform also gives opportunity to play against the best bowlers of the world, which otherwise would not be available in the domestic circuit.”

DK has represented five franchisees. He was with Delhi Daredevils for the first three editions. Moved over to KXIP in 2011 but was bought back by DD in 2012. The next two editions, he represented Mumbai Indians. The 2015 editions saw DK donning the RCB colours while in 2010 he was purchased by Gujarat Lions.

Having featured in 138 games, in all the editions out together, remaining unbeaten on 14 occasions, Dinesh Karthik has accumulated 2,542 runs at an average of 23.75 with 86 runs being his personal best. He has 12 half-centuries to his credit.

From behind the stumps, he has held on to 80 catches and has effected 26 stumpings.

Dinesh Karthik would continue to sport the Gujarat Lions colours in 2017 also.

I asked him whether IPL has helped him in his game improvement, he says, “As I said earlier, IPL gives me the opportunity to play along with and against world-class players and that definitely improves my game.”

Turning attention to the ongoing Border-Gavaskar Trophy, Dinesh Karthik says, ‘The current Indian team is an excellent one under the leadership of the vibrant Virat Kohli. He is a performer in his own rights and extracts the same from the boys. His on-field aggression is really appreciable as it helps brings out the best in him and the other boys in the team.”

“Both the teams have played a very competitive cricket thus far and the final encounter would also be as interesting and absorbing as the first three.”

“The boys have really gelled as a unit and have shown a lot of character in putting their best efforts in the interest of the team.”

“Kohli is the fittest cricketer in the circuit and it is really amazing to see the amount of efforts he puts in to his fitness regime which could be difficult for many to follow. Outsiders only see the glamour attached to him but they don’t see and or realise the stupendous efforts put in by him to achieve that. He is a strict disciplinarian.”

“The current series is played with a high level of competition with both the teams not giving in anything to the other.”

Concluding the interaction, we signed off, wishing good luck to him for the ensuing IPL season keeping the hopes alive to see him don the national colours in all formats.