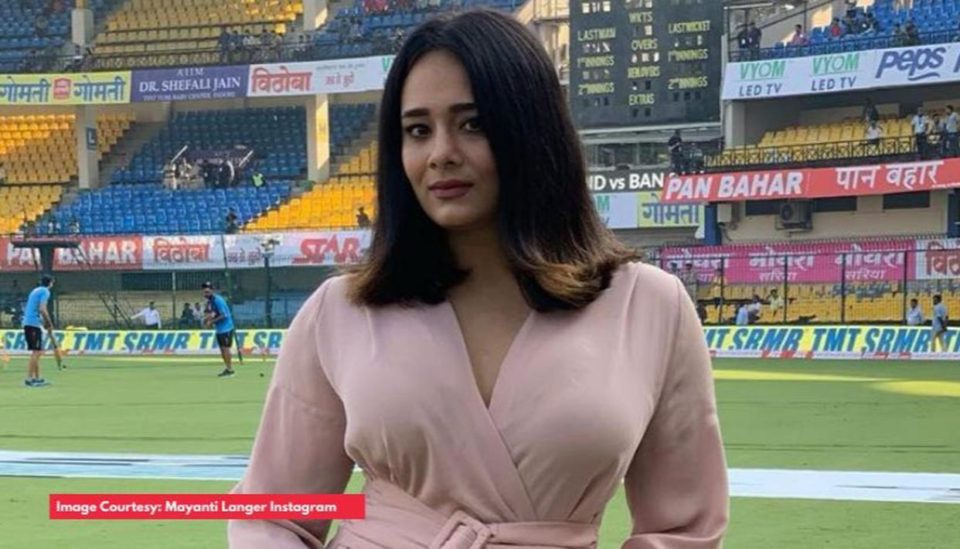 CricFit correspondent, Yash Kashikar, had the privilege of a conversation with Mayanti Langer, one of the most renowned names in the sports broadcasting sphere today.

Q. Please take us through your formative years. Did you always have the knack for sports?

Mayanti: Being an army man”s kid, I grew up in a cantonment which actually allowed me to do various sorts of activities like cycling with my friends or playing some sports with them. In school, I used to play football and in fact, I was also a part of a couple of football leagues back then but I never really imagined it to be anything more than just a hobby. Also, in college, I have helped to run a girls football league because during those days girls football was coming up in Delhi and I always wanted to be a part of it. So, that was my initial interaction with sports.

Q. How did you exactly get into broadcasting?

Mayanti: I used to run the Indian Youth Soccer Association (IYSA) league a few years ago in Delhi and someone had actually come to do a feature story on it and they had taken my bite for it. A couple of years later when Zee Sports was coming up, they were looking for some anchors. So, these people had heard of me through that particular league and thus they called me up for the auditions. In fact, I had just finished my graduation back then and I was looking forward to doing my masters in arts, so, I never really thought of Television. Eventually, everything fell into place and that is how I started doing some live Beach football games for them.

Q.Please talk us through the experience of your first stint as a presenter?

Mayanti: Actually, the network with which I started, they gave me a lot of opportunities to groom myself in front of the camera. Since I  never really thought of all this as a profession, I never gave attention to the fact that there is a camera. So, I don”t really know what is the right or the wrong way of asking questions. It is just something which comes naturally to me. My first live event was the football Federation Cup in Goa. And that was definitely a big challenge because it was my first experience of hosting the event from the venue. So, to be honest, initially I was very nervous but once it all started I completely forgot about the cameras and just got into the action. In fact, I never really pay attention to the fact that there are viewers watching and assessing the show. Even today, 10 years down the line, I just look at it as a conversation among a group of friends or colleagues over a certain topic.

Q.You have also been an associate producer of the football show you used to anchor for Zee Sports. So, which one do you like more- anchoring or production?

Mayanti: Well, now I don”t really have an opportunity to produce a show. In fact, we have a fantastic group of producers who work very hard behind the scenes. However, the experience of producing, editing, putting different stories together and conceptualizing a show, has definitely made me a better anchor. It helps me to understand what we are trying to do as a team. Because at the end of the day it”s not only about the host but it is a collective effort. So, if we are putting up a story together then I must understand all the elements included with it. For example, if something is being edited or some graphics are run in the studio, my experience of producing actually helps me to visualize all these things from the producer”s point of view and then I put it across as an anchor. So, it kind of gives me an insight into what happens behind and before we go on air.

Q. How do you prepare yourself for every show?

Mayanti: To be honest, I was never very studious but I really like the research aspect which goes into a show. Our job as an anchor is more about letting the experts talk. However, I do read some articles, blogs and go through a few videos. I always have my own notes even though at times I may not even refer to it. But it is something which is more of a habit for me. In fact, we get a lot of stats and other stuff for the shows. And even if all that information is not necessarily applied in the shows, somewhere down the line it definitely helps. At times you suddenly remember a random stat or an incident and it just comes out while we are hosting.

Q.You have hosted 6 World Cups across 3 different sports. So, now when you sit back and recall it, how do you look at this particular journey of yours?

Mayanti: I really feel blessed to have been in all those situations. In fact, one thing which I am very proud of is the fact that I have been able to cover different sports. And to be honest, I have always looked at myself as a sports presenter rather than being just a cricket presenter. The first World Cup which I did was the Hockey World Cup and then followed the football and cricket respectively. So, I really feel proud to have been involved in all these prestigious events. In fact, I have also covered the Olympics which was actually a very challenging task because it used to be a long 8-hour stint. And those are the situations where I have really enjoyed myself as a presenter.

Q. As a part of your job, you get to watch the games quite closely. On the basis of that, what do you make of the current Indian side and the bunch of youngsters it has got?

Mayanti: I think it is the drive of today”s generation which is best exemplified in this team. They want to be the best in any case. I always feel that arrogance is a good thing if it is tempered and used in a right way. It only makes you believe that you can be the best. Of course, it doesn”t mean that no one is better than you. However, this side wants to do well across the globe and that is something which reflects in their performance as well.

Q. When not working, how does a typical day look like in your life?

Mayanti: To be honest, it is just like any other housewife. I get up in the morning, cook food, wash the clothes and make sure that the house is clean. In fact, I and my husband usually don”t get a lot of time together because both of us are mostly traveling due to our work. So, whenever we are together the discussion is never related to our profession. We hang out with our friends in the evening or maybe just sit in front of the TV and enjoy it. And at times I feel that such kind of cut-offs from your routine life are very important because you are able to live a different life.

Mayanti: The biggest thing which I learned from myself was the fact that I admired a lot of people in this field but I never really wanted to be any one of them. Maybe because I never really thought of being a television presenter. Of course, I always have conversations with people who have been involved in this field for close to 20 years or even more and I have surely learned a lot from them. I always feel that everyone can create a niche for themselves. There will always be someone to help you out with your skills but please don”t try to be someone else because that won”t work.

Mayanti Langer gets ready to survive the rapid-fire questions hurled at her by CricFit correspondent, Yash Kashikar.

Mayanti: Maybe you can tell me that because I have been called by several different names by many foreign commentators (She chuckles).

Mayanti: I and my husband had a brilliant holiday in Vietnam recently. And a place which we would like to cover is Europe because it has got a rich history and tradition.

Mayanti: I don”t really have a favorite movie but most recently it has to be the biopic on Pele.

Q. One song which is at the top of your playlist currently?

Mayanti: Well, that”s a very tough question because I have known both of them for a very long time. So, I really can”t pick a favorite among them but over the last 2 years, Jatin and I have been through a lot of similar sort of things together for Star Sports. Therefore both of us are currently in the same boat and Arjun is just coming into the party.

Q. Best cricket match you have ever been a part of?

Mayanti: In recent memory, it has to be the 2015 WC game between India and Pakistan at Adelaide. The sheer experience of being on the ground and listening to the entire Indian crowd sing the national anthem in a foreign country was simply a goosebumps moment.

Q. Ever failed at a subject in school?

Mayanti: Not once but a lot of times actually. I have failed in Physics, Chemistry, Maths and just about managed to pass the other subjects. In fact, in Maths the passing marks for board exams were 35 and I somehow managed to get 39.

Q. Best compliment you have received till date?

Mayanti: I am very grateful that I do receive a lot of positivity and encouragement from people. So, I won”t actually single out a particular compliment as such. However, the fact that Star has actually given me the responsibility to front cricket without keeping in mind any things like the gender and all, is actually a huge compliment for me.

Q. One superpower you would love to possess?

Q.Describe yourself in one word?