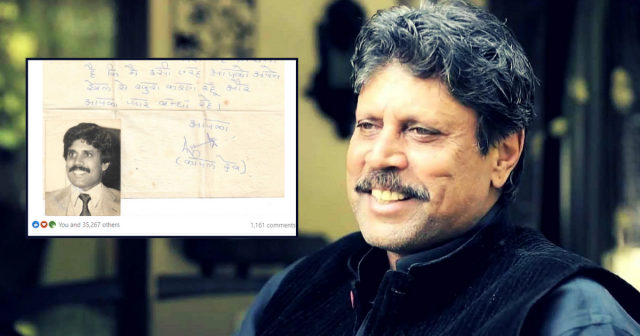 ’83’ movie starring Ranveer Singh as former India captain Kapil Dev, has been shattering box office records since its release on Christmas Eve. The film received appreciation from all quarters, and it appears many cricket enthusiasts used it as an opportunity to relive past memories.

One among those cricket fanatics is Priyaranjan Jha, the Vice President of Global Delivery Hubs at PepsiCo GBS. He recently shared a post on his LinkedIn account where he talked about the time when he received a letter from the great Kapil Dev.

Priyanjan revealed that he wrote a letter to his childhood hero Kapil Dev 39 years ago. Kapil hadn’t yet been named captain, but the all-rounder was widely regarded as one of the greatest already. In the letter, Priyaranjan had requested for Kapil’s colored photo and autograph. Despite being mocked by his classmates, Jha was positive about getting a reply from Kapil. Just as he was about to give up, he received a handwritten letter.

In the post, Jha listed four life lessons which he learned from his idol:

Life Lesson #2: ALWAYS STAY HUMBLE, AND BE NICE TO THOSE WHO LOVE YOU, EVEN STRANGERS.

Priyaranjan added that Kapil penning a letter to the little guy demonstrates his humility and compassion for the young boy.

Life Lesson #3: YOU HAVE IMMENSE POWER TO INSPIRE. YOU DON’T KNOW WHO IS WATCHING YOU AND LEARNING FROM YOU.

Jha went on to say that Kapil’s letter motivated him so much that he has kept it with him for over four decades and reads it now and again.

Life Lesson #4: GREAT SUCCESS IS ACHIEVED NOT BY GREAT INDIVIDUALS BUT BY GREAT TEAMWORK

Jha articulated this point by citing the Indian team’s performance in the 1983 World Cup. The Indian squad didn’t have many superstars, but it was the combined effort of all players that contributed to a successful campaign. He also added that after watching the 83 movie, his 11-year old son is now a fan of Kapil Dev.