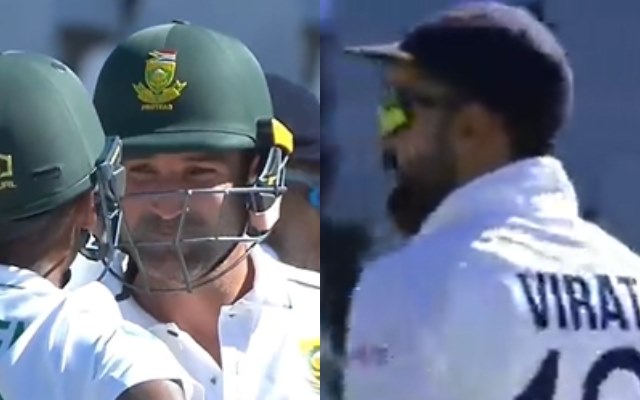 The Test series between South Africa and India is nearing an epic conclusion as the 3rd Test at Cape Town is going down to the wire. South Africa looked to have edged ahead of India in day 3 but the crucial wicket of Dean Elgar in the very last over of the day off the bowling of Jasprit Bumrah has made the test hang in the balance once again.

There was plenty happening on the day as Rishabh Pant scored a ton for the ages to keep India in the game. Chasing 213, South Africa made a steady start but the game started boiling in the 21st over as Elgar was adjusted LBW off the bowling of Ravichandran Ashwin. Elgar took a review in hope and it looked Elgar was plumb in front, but the ball tracker showed the ball to be going over the stumps to the surprise of almost everyone watching including the batsman himself.

Virat Kohli was seen uttering “F**cking joke” as he kicked the turf in frustration.

The umpire Marais Erasmus was heard saying “That is Impossible”

“Focus on your team as well and not just the opposition, trying to catch people all the time.” “Well done DRS, very well done”, Kohli kept on speaking to the stump mic.

Not only Virat Kohli but the Indian vice captain and the experienced spinner were also displeased.

“You should find better ways to win ‘Supersport'” (Host broadcaster) said Ashwin who was gutted in losing a wicket off his name.

You can see the video of Virat’s fury at the broadcasting team :

"Fcuking camera team"
"Supersport is a joke"
"focus on your team as well as they shine the ball eh not just the opposition. trying to catch people all the time"
Kohli is angry as hell pic.twitter.com/KYFyM8BUPP

Seemingly this sequence of events may have rattled the Indian attack as India conceded 35 runs off the next 6 overs and helped South Africa reach a commanding position until Bumrah broke through in the last over of the day.

India faces a big challenge of taking 8 wickets in order to win their first-ever series in South Africa while South Africa will be needing 111 more runs to win the series.

We are all set to witness an enthralling finale to what has been a fascinating Test Series.