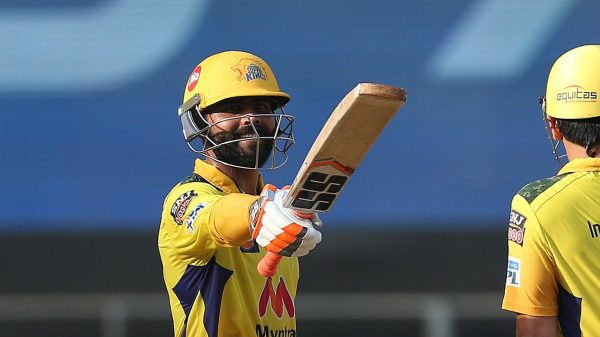 Ravindra Jadeja just showed why he’s the best finisher in India at the moment in IPL 2021. The CSK all-rounder completely annihilated Harshal Patel in the final over of the innings. Ravindra Jadeja initially took his time but when the time arrived he made a mess of Patel’s bowling figures.

He was RCB’s best bowler before the 20th over but Jadeja took him to the cleaners. Jadeja hit him for 4 consecutive sixes in the last over and kept peppering the leg-side boundary.

Ravindra Jadeja hits 37 runs in the 20th over against RCB

On every occasion, Harshal Patel missed the yorker and Jadeja made him pay by depositing him into the stands. Eventually, Jadeja struck 37 runs in the final over and equalled the record of most runs in an over in IPL history.

At one stage CSK was looking at a target of around 160 but Jadeja had other ideas. After his onslaught in the final over CSK reached a mammoth total of 191 runs after 20 overs.

Mow its game on in Mumbai as RCB will have to bat extremely well now to defeat CSK. After the final over captain Virat Kohli was visibly upset with the lengths Harshal bowled Jadeja. Every ball was in the slot and a player of the quality of Jadeja needed no second invitation. Jadeja finished with 62 in mere 28 deliveries as he hit 4 boundaries and 5 sixes.

Meanwhile, here’s how experts and fans reacted after Ravindra Jadeja produced one of the all-time great knocks in IPL history. From Virender Sehwag to Harsha Bhogle all were in awe of Jadeja’s hitting in the death overs.

Uff! 37! What a tournament Jadeja is having. I think #CSK have enough.

Ravindra Jadeja smashes Harshal Patel for 37 runs in the final over. The equal most expensive over in the history of the IPL.

Ball 6 aur run 37. Only Sir Jadeja can do it. Unbelievable hitting against the purple cap holder. #CSKvRCB

Wow, that was crazy from Ravindra Jadeja. Nearly 20% of the team score coming in the final over. Whistle Podu @ChennaiIPL #CSKvRCB

Also Read: Akash Chopra Points Out The Tricks KKR Are Missing In IPL 2021 So Far