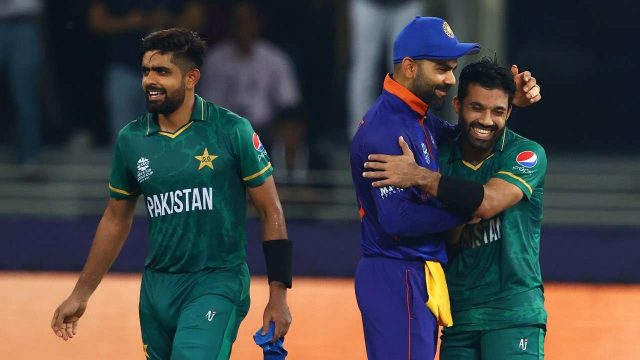 India had a horrific campaign at the World T20 last year, failing to qualify for the semifinals. The loss to Pakistan in the opening encounter pretty much summed up the whole campaign.

Virat Kohli’s men were completely outplayed, resulting in Pakistan’s first-ever win over India in a World Cup match. India was beaten by 10 wickets that day at Dubai, with none of the players being able to make a mark.

Mohammad Rizwan, the explosive Pakistani opener, was one of the chief architects of Pakistan’s comprehensive victory in that match. His partnership with Babar Azam ensured a walk in the park for Pakistan.

Talking about the game, Mohammad Rizwan recounted a funny incident that took place during Virat Kohli and Rishabh Pant’s stay at the crease. The Indian wicketkeeper got away with a close LBW call that went in his favour, keeping India’s hopes alive for a solid total. Kohli’s reaction to that was what caught Rizwan’s attention.

“Some things are part of tactics. No doubt Virat Kohli is world’s No. 1. When we play cricket, it’s like family. I remember when we took the review against Pant when he played the reverse sweep, he said… ‘what are you doing? Getting everyone out inside 10 overs?’” Rizwan told Paktv.tv

“But like I said, these are tactics. Later, when I walked out to bat, I spoke to him then too. Rest, whatever chats took place inside the change room, I can’t disclose but I can say that he’s a very nice person,” he added.

I am only focused on winning my game – Mohammad Rizwan

Mohammad Rizwan has had a dream run in 2021. He was also awarded the award for being Pakistan’s most valuable cricketer for the year, largely because of the truckloads of runs that he scored across formats and his efficiency behind the wickets.

Despite the success last year, Rizwan feels that his best is yet to come.

“I am only focussed on improving my game. Initially, I used to idolize (Sachin) Tendulkar and then AB de Villiers, but it’s not like I would like to copy them. Yes, I have learnt a lot of things watching them play. As far as learning from Pakistani legends is concerned, I have picked certain things from Misbah-ul-Haq, (Shoaib) Malik, (Mohammad) Hafeez and others,” he added.