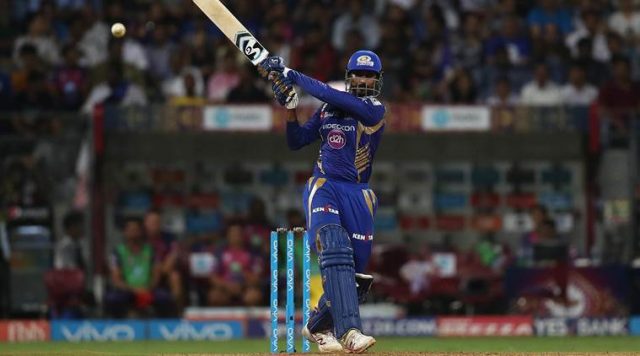 Hitting six sixes in an over is a special and a rare feat. There have been a few individuals who achieved the feat in International cricket, the latest being USA’s Jaskaran Singh. Mumbai Indians and India all-rounder Krunal Pandya has expressed his wish to accomplish this record.

In a video on Espncricinfo, the all-rounder was quizzed with questions about his cricketing career. He was asked about a record that he wishes to make his own, to which the all-rounder said, “Hitting six sixes in an over.”

The last few years have seen an increasing demand for Biographies on sportspersons life in India. When asked about who should play him and his brother, Hardik Pandya in a movie made on their journey, Krunal said,

“Vicky Kaushal will play me and Ranveer Singh will play Hardik.”

In the conversation, Krunal Pandya also answered an interesting question, about what he would name a T20 team if he had one, “Pandya Invincibles,” said Krunal.

The Pandya brother’s duo is considered one of the most popular pairs in world cricket. Krunal Pandya, who is the elder of the two, revealed if he has never sledged Hardik Pandya.

“The thing is when we practice also we need one more person to judge who is right. Because when we are practicing for example if I am batting and he is bowling or he is bowling I am batting, we need a third person to decide whether that is out or was a one-run or a four or six. Because if we both are alone we won’t come to a conclusion,” said Krunal.