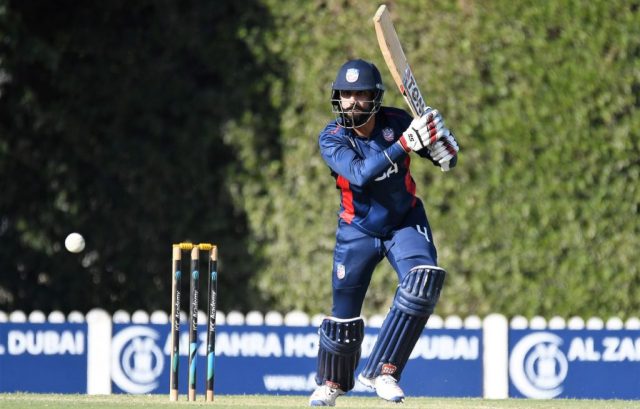 The game of Cricket has already seen several cricket records from the players. And, what could be better to have a record of scoring six sixes in an over? While this record has already been made by a few, the USA player Jaskaran Malhotra has been added to the list recently.

During the 2nd ODI against Papua New Guinea at Al Amerat Cricket Ground in Muskat, he played amazingly and went absolutely berserk. He also smashed a century. However, Jaskaran Malhotra came to bat while his team struggling at 27/3 in 9.2 overs. The pressure was on him to post a decent competitive total. And, after that, it was only his show with the bat.

On Thursday, he got an opportunity to revamp his ODI career which used to read – only 55 runs in 6 matches so far. He grabbed the chance with both hands and started punishing the opponent bowlers.

Jaskaran Malhotra has joined an exclusive club of international cricketers to hit 6️⃣ x 6️⃣s in an over with a stunning assault from the final 6 balls of the innings as he becomes the first American to make an ODI 💯 with 173 not out!

Despite losing partners at the other end, Jaskaran Malhotra did not lose his focus and later scored his maiden ODI century, becoming the USA’s first-ever centurion in ODI cricket as well. The right-handed batsman remained unbeaten on 173* off 124 deliveries which also included 4 boundaries and 16 sixes. Surprisingly, 6 of those 16 maximums came in the final over of the innings as well.

PNG bowler Gaudi Toka came to bowl the final over of the first innings and the USA were hoping for a big over as well. Being at the strike, Jaskaran Malhotra went on to smash 6 sixes in the over, scoring 36 runs in the 50th over. With this, they posted 271/9 in 50 overs courtesy of his heroics as well.

Watch Jaskaran Malhotra creating history as he hit six sixes in an over against PNG!