The Indian skipper Virat Kohli and renowned Bollywood actor Anushka Sharma welcomed a bundle of joy into their lives as they were blessed with a baby girl in the month of January. The Family is currently staying in Ahmedabad in the Indian team’s biosecure bubble where the Hyatt Regency hotel staff has put forward a very cute gesture with a nameplate outside their room with names of Vamika Kohli, Anushka Sharma and Virat Kohli.

The Indian captain had taken a paternity leave during the Test series against Australia to attend the birth of his first child. Virat Kohli returned back to the India side for the home series against England and was seen captaining the side in the four-match Test series and 5 match T20 series.

Also read: Today’s Final Between India And England Could Be The Final Of T20I World Cup In 8 Months- Michael Vaughan

This picture of the nameplate with names of Virat Kohli’s family has taken social media by storm for the cute gesture made by the staff members of Hyatt Regency who are also a part of the biosecure bubble with the Indian and English teams. It is also being said that Indian all-rounder Hardik Pandya’s room also has a similar nameplate with names of his wife Natasha and son Agastya on it. 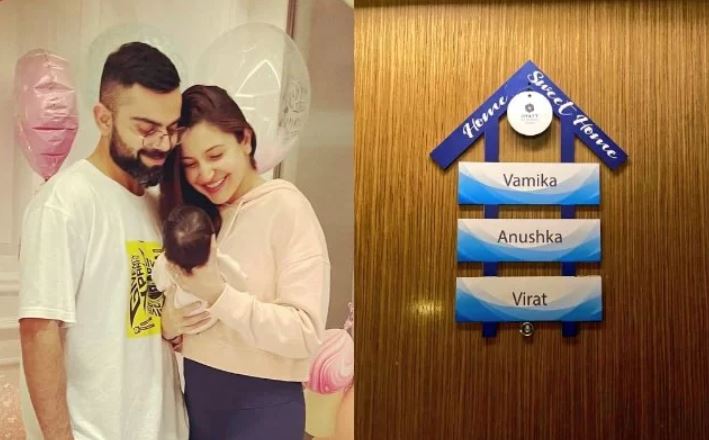 It was also discovered that few other Indian players also received similar gestures in the form of personalized cushions while all the players received personalized room keys. Bio-secure bubbles have grown to utmost importance in recent times with the emergence of the COVID19 cases in India.

After neighbouring nation’s Pakistan Super League being postponed indefinitely, BCCI have placed strict rules and regulations to avoid any sort of bio bubble breach which could harm the nature of the series.