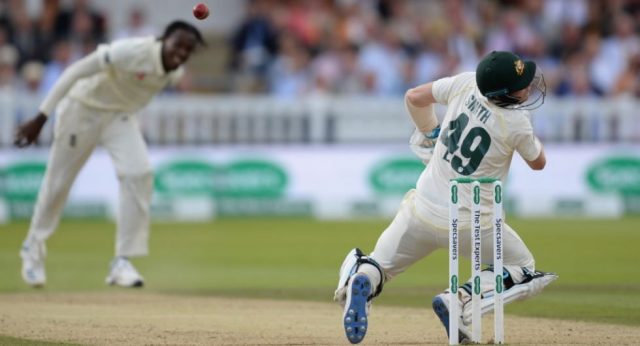 England pacer Jofra Archer has recalled his gruelling Ashes battle with Australia batsman Steve Smith where the latter got hit by a deadly bouncer in the 2019 Ashes series. Smith, one of the world’s best Test batsmen, was near to his third consecutive Ashes hundred when he was struck on the side of the head off Archer.

Soon after that, Smith fell down on the ground and received medical treatment on the field as well. Although he got back on his feet, he decided to walk back to the pavilion after having a chat with team doctor Richard Saw. And, Jofra Archer opened up on this incident.

“I think in England personally when the ball hits you it can feel a lot worse than it is because sometimes it’s a bit cold and I thought it was that until I actually saw him roll … when he went down and then he rolled on his back, I went ‘oh dear,’ you know. I thought it was very serious, but he came out and he batted again. Obviously, you don’t ever want a cricket related death. There was one already and there’s no need for another one. It’s hard enough trying to get the kids to come and play cricket,” Archer said while sharing his views to NewsCorp.

“I enjoyed the challenge” – Jofra Archer

Steve Smith, who missed the next Test at Headingley due to the concussion, finished the series without getting out off Archer even once. He finished the Ashes series with 774 runs in seven innings which came at an average of 110.57 including a double hundred, two tons, and three fifties as well.

“I know they say he’s tough as nails anyway, but I don’t think he would have come out to bat again if he wasn’t. Just his resilience. You are putting yourself out there and risking everything for your team. Honestly, throughout that whole series, I just think his wicket wasn’t for me. There were a few top edges that could have gone to hand. But I just enjoyed the challenge,” Jofra Archer concluded.