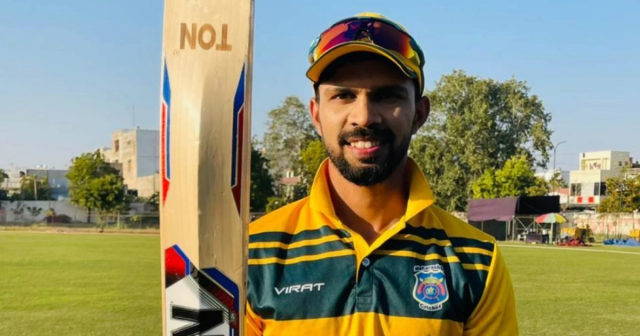 Ruturaj Gaikwad has struck his fourth century of the season in the Vijay Hazare Trophy 2021-22 and is showing no signs of slowing down when it comes to piling up runs. On Tuesday, the Maharashtra skipper played a brilliant knock of 168 runs to take his side home against Chandigarh at the Saurashtra Cricket Association Stadium in Rajkot.

The swashbuckling hundred meant that Ruturaj achieved the 600 run-mark in this edition of the tournament. Ruturaj also became the fourth player in the history of Vijay Hazare Trophy to make four centuries in a single season, joining the likes of Virat Kohli, Devdutt Padikkal, and Prithvi Shaw.

However Gaikwad’s team failed to qualify for the knockout stages of the tournament. Maharashtra were tied at 16 points with Kerala and Madhya Pradesh. The latter two teams won the race by virtue of a better Net Run Rate (NRR).

Ruturaj Gaikwad can bat at No. 3 also – Dilip Vengsarkar

Former India cricketer Dilip Vengsarkar has advocated for Ruturaj’s immediate selection in the Indian side.

“You must pick a man in form. How many more runs does he need to score to prove himself? It is high time the selectors pick him straight away and give him a proper opportunity.”, Vengsarkar had said in a chat with TOI.

Vengsarkar also pointed that Ruturaj Gaikwad is at the perfect stage in his career to get regular chances in the Indian limited-overs team.