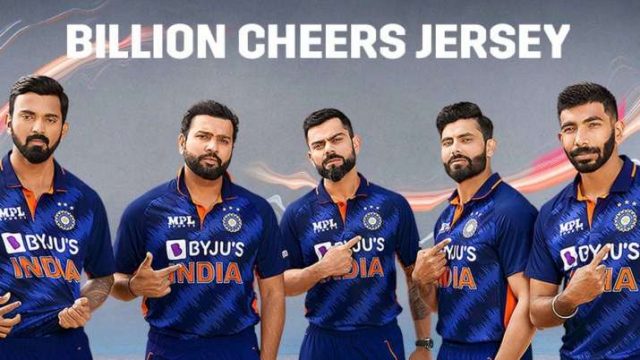 The BCCI has unveiled Team India’s jersey for the T20 World Cup 2021 to be played in the UAE. The qualifiers start from October 17 while the Super 12 stage starts from October 23. India take on Pakistan in their first game on October 24. India are pitted alongside Pakistan, New Zealand and Afghanistan in group 2.

The new kit is called the ‘Billion Cheers Jersey’ which replaces the 1992 World Cup pattern-like jersey the team had been donning since late 2020.

The Billion Cheers Jersey – The pattern on the jersey is inspired by the cheers of a billion fans. See what the Indian Cricketers have to say about the new Team India jersey #BillionCheersIndianJersey #IndianCricketTeam #TeamIndia Order now https://t.co/BiweYY981p pic.twitter.com/UjRsYc20gJ

“Presenting the Billion Cheers Jersey! The patterns on the jersey are inspired by the billion cheers of the fans,” the BCCI tweeted. Virat Kohli, Rohit Sharma, KL Rahul, Ravindra Jadeja and Jasprit Bumrah posed for a picture wearing the same jersey.

Fuelled by the billion blessings, Team India is ready to don the new jersey and bring out their A-game. 🇮🇳

Meanwhile as confirmed by the BCCI earlier, former Indian skipper MS Dhoni will be mentoring the side in the mega event. There are reports that he won’t be charging for his role in the meantime.

BCCI Secretary JayShah said that the BCCI is grateful for MS Dhoni as the former captain agreed to serve the team during the World Cup.

“MS Dhoni is not charging any honorarium for his services as the mentor of the Indian team for the T20 World Cup,” Jay Shah said, as quoted by ANI.

Meanwhile, Team India will play two warm-up games ahead of the start of their T20 World Cup campaign. They play against Australia on October 18 and against South Africa on October 20. India were the champions of the inaugural T20 World Cup back in 2007. They then made the final in 2014 and the semi-final in 2016.