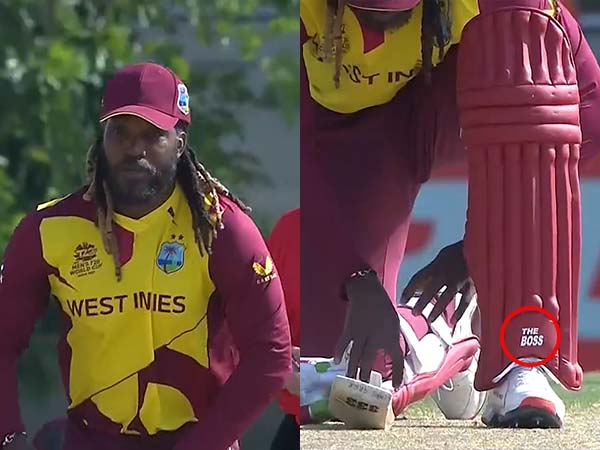 Chris Yale, The Universe Boss is perhaps playing his last ICC event. Two-time winners of the T20 World up the title with West Indies, Gayle is looking for his third with the side. He is coming into the tournament not with good form, however, the southpaw is among the most feared batsman in the format.

Earlier today, West Indies took on Pakistan in a warm-up game in the T20 World Cup. In the game, he was seen sporting his own personalised gear with “The Boss” written on his pads.

Ahead of the tournament, Chris Gayle hit out at former Windies pacer Sir Curtley Ambrose who said that he would not pick the former in his playing XI for the World Cup. Age is catching up with Gayle who is currently 41 and still playing the T20 format. “I am speaking about Curtly Ambrose. Singling out Curtly Ambrose, one of your own. I highly respected him when I came into the West Indies team,” Gayle told The Island Tea Morning Show, a radio station in St Kitts, on Tuesday.

“When I just joined the team, I looked up to this man. But I am now speaking from my heart. I don’t know what, since he retired, what he had against Chris Gayle. Those negative things he has been saying within the press, I don’t know if he is looking for attention, but he is getting the attention. So I am just giving back the attention which he requires and which he needs,” he added.

“I can tell you personally, and you can let him know that Chris Gayle, the Universe Boss, have no respect for Curtly Ambrose whatsoever,” he further said.

West Indies will meet England in a repeat of the 2016 T20 World Cup final in their first Super 12 match on October 23.