Australia beat New Zealand by eight wickets and with seven balls to spare to win their maiden T20 World Cup title. Mitchell Marsh was the hero for Australia with the bat scoring an unbeaten 77 off 50 balls. David Warner (53) and Glenn Maxwell (28*) finishing it with a switch hit added more drama to the Aussie win. This is their first T20 World Cup and their sith overall.

Set to chase 173, David Warner anchored the innings scoring 53 off 38 balls. Aaron Finch fell for a low score once again and that was when Mitchell Marsh took centre stage. 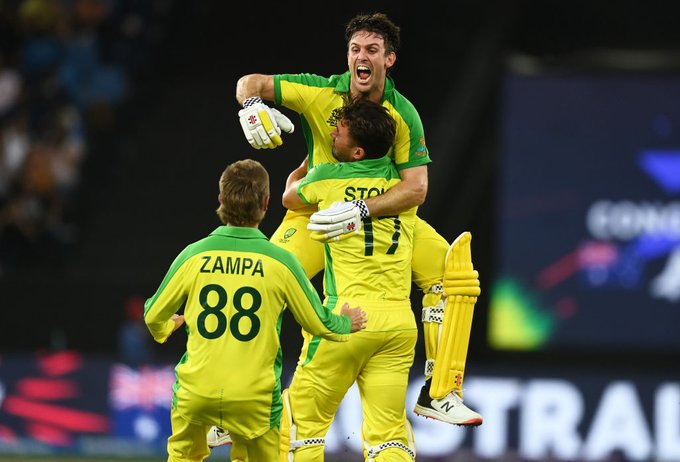 He hit his first ball for a six and since then did not look back. He first added a 92-run stand with Warner and then another unbeaten 66-run stand with Maxwell. It was Maxwell who hit the winning shot and that too a switch hit to give Australia one of their famous wins.

Earlier in the game, Aaron Finch won the toss and opted to field first. Kane Williamson scored 85 off 48 balls to take the Kiwis to 172/4 after their 20 overs. There were contributions from Martin Guptill (28) at the top and Jimmy Neesham (13) and Glenn Phillips (18) in the death overs.

The Kiwis took off 60 from Mitchell Starc’s spell as he had a tough day in the office. The Australian batters ensured that they take the revenge on behalf of Starc. They belted the Kiwi spinners for 63 runs from six overs without giving them a wicket.

Tim Southee went for 43 off his spell, while Trent Boult picked up 2/18. Josh Hazlewood was the pick of the Aussie bowlers taking 3 for 16.

The Twitterverse congratulated Australia for a famous win. Congratulatory messages started coming thick and fast as soon as Maxwell hit the winning runs.

Tremendous final, some terrific batting! Williamson played one of the all-time classics, but Warner and Marsh were just unstoppable! Congratulations to Australia on their maiden triumph, New Zealand have nothing to be ashamed of. #T20WorldCup

#Aus lost Finch and Marsh made the very next over into a big one. Lost Warner and the same treatment meted out in the following over. The ability to counterattack in knockouts is special. Well played, #Aus Zampa and Hazlewood were special throughout #T20WorldCupFinal

The emotions from Mitch Marsh after that win 💛https://t.co/ejaVX07a0O | #T20WorldCup pic.twitter.com/jMpVGYIWpk

This ages well. What say @davidwarner31 time to have a chat!! https://t.co/6xvobFwI97

They are indeed a super-power in world cricket! Congratulations @cricketcomau for winning the first #T20WorldCup . Thoroughly deserved! Well played @BLACKCAPS! It had been a wonderful show.

Many Congratulations to Team Australia for such a brilliant performance and winning the ICC T20 trophy! #AUSvNZ #T20WorldCupFinal 👏🏆

#Australia just too powerful. What a player Mitch Marsh has become. Hopefully his body becomes a partner in his future because he is too good to be playing as little he has. Brilliant today

“It means a lot. We have worked hard for a long time and it is honour to be here with the boys and take the trophy home. Warner’s last two weeks have been amazing. A lot of people were writing him off. He came in with exceptional intent and took the game away at the start” said Steve Smith after Australia’s win.