Let’s take a look at the head to head records between India and New Zealand:

Head to Head records at the last five meetings in an ICC tournament between India and New Zealand:

Both the teams have faced quite a few challenges coming into this T20 World Cup 2021. In the first match for India against Pakistan, a fiery opening spell from Pakistan pacer Shaheen Shah Afridi blew apart India’s top order and New Zealand also have tall fast bowlers which can trouble the Indian openers just like Shaneen Shah Afridi – Trent Boult, Tim Southee, Lockie Ferguson and Kyle Jamieson, who can swing the ball both ways in the powerplay overs.

India’s top 3 featuring KL Rahul, Rohit Sharma and Virat Kohli will have to carefully tackle the swing and deadly pace in order to win the battle against Kiwis.

The Indian bowlers also had a poor outing against Pakistan at the Dubai Internation stadium. They will surely like to change that and bring in more intent while bowling against New Zealand. 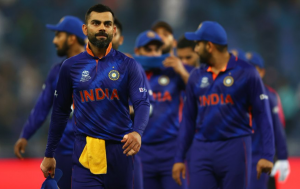 Both teams will face each other in a very crucial match which will decide their fate in this T20 World Cup at the Dubai International Stadium.