The Pakistan Cricket Board has announced three changes to their initial T20 World Cup squad that was announced in September. The side will be still led by Babar Azam while and Haider Ali, Sarfaraz Ahmed and Fakhar Zaman included in the final 15. The marquee tournament is scheduled to begin on 17 October and the summit clash will take place on 14 November. Pakistan is pitted in group A along with teams like India, New Zealand and Afghanistan.

Sarfaraz Ahmed and Haider Ali have replaced Azam Khan and Mohammad Hasnain respectively, while Fakhar Zaman who was initally in the reserves have been added to the main squad.

PCB Chief Selector Mohammad Wasim has come out with an official statement on the newly announced Pakistan squad for the mega event.

“The three in-form players bring with them wealth of experience and talent, and provide further stability, balance and strength to the side.

“I am pleased with the intensity and high quality of cricket that we have witnessed in the National T20. It has not only provided the players excellent match practice in the lead up to the UAE competition, it has also given us the opportunity to closely monitor the player progress and then make decisions that are in the best interest of the side for what will be a cut-throat tournament.” 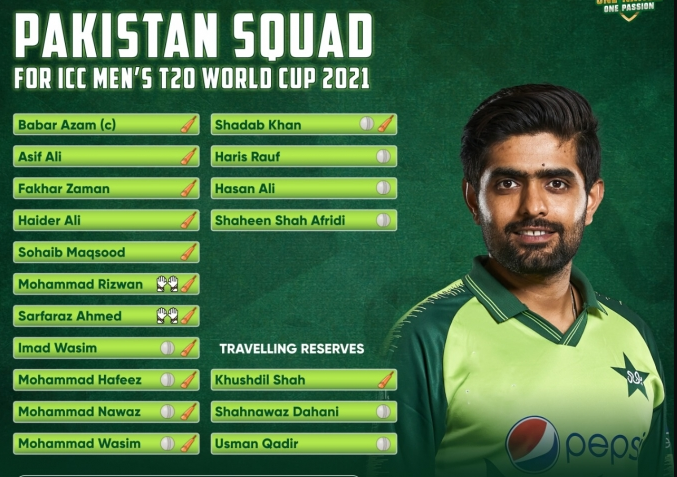 Pakistan won the 2009 edition of the T20 World Cup and start its 2021 campaign against India on September 24 in Dubai. They then play against New Zealand in Sharjah on September 26 followed by a match against Afghanistan in Dubai on October 29.

Ian Smith Not Happy With Pat Cummins Leading The Team With...