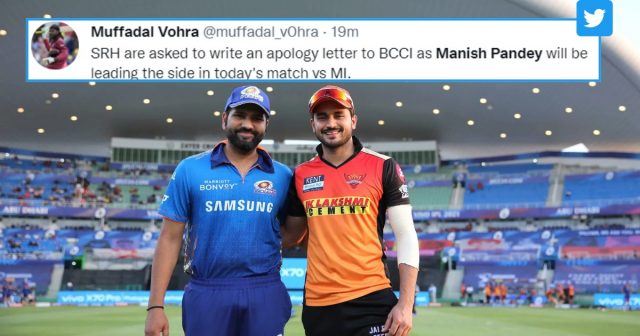 IPL is making history on a night when Mumbai Indians need to make history quite literally. They need to win by 170 runs against Sunrisers Hyderabad. Rohit Sharma called right at the toss and opted to bat first looking forward to a good start. Meanwhile, in what was a surprise, Manish Pandey walked out at the toss for SRH. This is his first game as a captain for any IPL side.

Manish Pandey at the toss explained the reason behind him walking out at the toss. He spoke about Kane Williamson picking up an elbow niggle and Bhuvneshwar Kumar Yadav also picking up a niggle.

“My first game as IPL captain. Last minute call. Kane had a niggle on his elbow, Bhuvi has a niggle too. We would have batted first too. We will look to bowl first and look to give Bombay little chance. I know they are going to come all guns blazing but we are ready” said Pandey.

Rohit Sharma, at the toss, looked at the near-impossible equation of making the playoffs. he also looked back at a season of ifs and buts for Mumbai Indians.

“The numbers are pretty scary, but we are going to give it all. Let’s hope we can come out and do what we love to do. It’s important to enjoy the game as well. It’s been an on-and-off season for us. This is a great opportunity for us to do something that’s never been done before. Our batters have’t come collectively and performed as a team in the UAE leg. But these guys have done exceedingly well for respective teams” said Rohit.

Twitter, meanwhile expressed their opinion of seeing Manish Pandey at the toss instead of the regular skipper.

Manish Pandey has now played the most IPL matches before making his captaincy debut (153).

Previous highest was Kieron Pollard, who played 137 matches before becoming the captain in 2019.#IPL2021 #SRHvMI

Manish Pandey SRH captain? Really? Like really? Wow. We could be in for something really …….. today

SRH are asked to write an apology letter to BCCI as Manish Pandey will be leading the side in today's match vs MI.#MIvsSRH #IPL2021

Gets dropped for bad performance, comes back in the xi as the LEADER. King Manish Pandey.

Manish Pandey who wasn't even in the team is captain. Kane Williamson out, Bhuvi out 🤔#MIvSRH

Kane Williamson before the toss 🕺 pic.twitter.com/NbPuICxqhB