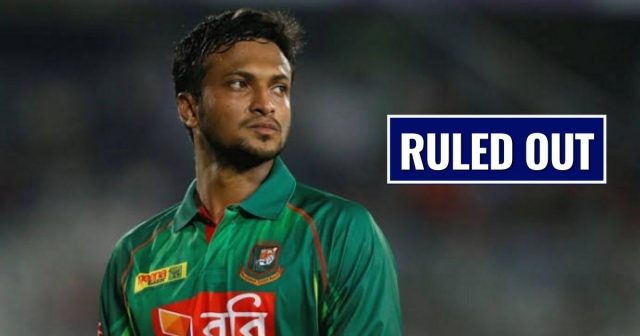 Bangladesh all-rounder Shakib Al Hasan has been ruled out of the ICC T20 World Cup 2021 due to a hamstring injury. The premier all-rounder’s injury comes at a time when his side is struggling to stay in the competition after three consecutive losses in the tournament. Bangladesh made it to the main round after playing the qualifiers but since then has lost their first three games.

Bangladesh lost against Sri Lanka, England and West Indies with Shakib not being able to create much of an impact in the tournament. The Bangladesh all-rounder injured his hamstring while fielding against West Indies and walked out to open the batting. He played on with the injury but could not continue long for his team’s sake.

Shakib Al Hasan scored 131 runs and picked up 11 wickets in six games that he played before he injured his hamstring. The Bangladesh Cricket Board has not named a replacement as yet and it will be interesting to see if they do it at all.

The 34-year-old now accounts for 40 wickets in the tournament. He overcame Pakistan’s Shahid Afridi in the process who lifted the trophy with Pakistan back in 2009. Afridi, who had 39 wickets, is closely followed by the likes of Lasith Malinga and Saeed Ajmal who had 38 and 36 wickets respectively.

Shakib Al Hasan has been ruled out of the T20 World Cup due a hamstring injury. An official statement is coming up. The allrounder sustained the blow in the match against West Indies. #T20WorldCup