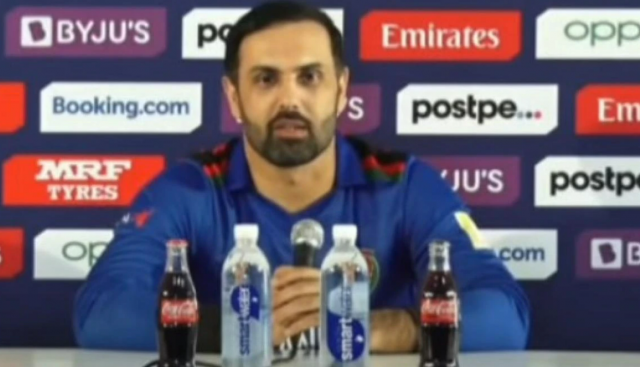 Afghanistan thumped Scotland in their opening game of the ICC T20 World Cup 2021. They posted 190/4 batting first and bowled out the opposition for 60 winning the game by 130 runs. Afghanistan skipper Mohammad Nabi handled his troops well as they registered their opening win.

Meanwhile, after the game, Mohammad Nabi had his moment during the post-match press conference. While he was settling down to address the reporters he said that a PC is the toughest thing for a captain.

“Sabse mushkil kaam hai bhai yeh (This is most difficult job to do)” while he was settling down. “Kitne questions hain? “5 minutes mei meri English khatam ho jayegi bhai (My English will be over in 5 minutes)” he said in a viral video.

This is one of the most funniest PC videos that is making the rounds in social media. More importantly, the Afghan side is topping the points table at the moment courtesy of their superior net run-rate after beating the Scotts.

Afghanistan’s mystery spinner Mujeeb Ur Rahman took five for 20 and along with Rashid Khan accumulated for nine opposition wickets for just 29 runs.

“It’s important to win at the start of the tournament. This was our plan, to bat first and post a big total. Both the openers started well, we finished the powerplay on a good note. The running between the wickets was good, we rotated the strike really well and Najib played well to help as post such a big total. The world knows we have some good spinners in the form of Rashid and Mujeeb, they’ve played everywhere in the world. We have a very good team combination. When we play the local tournaments, I, Mujeeb and Rashid are the most expensive bowlers. Mujeeb is playing his first T20 World Cup match and he got the Player of the Match award, that’s good to see, it’s fantastic” said an elated Nabi in the post-match presentation.