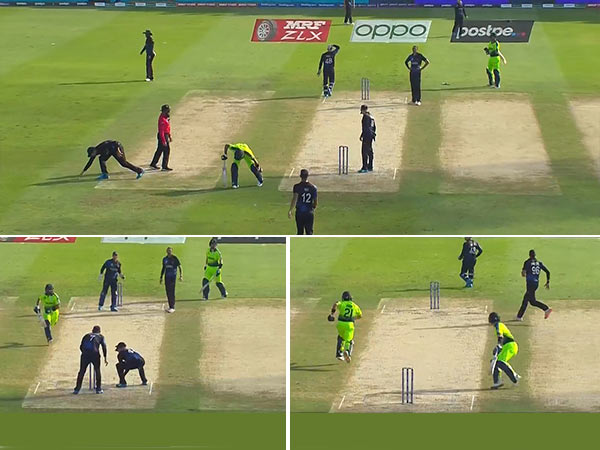 Meanwhile, there was a comedy of errors as the Namibian players missed an easy run-out opportunity in the last ball of Ireland’s innings. The side scarped through to 125/8 in their 20 overs. Paul Stirling (38), Kevin O’Brien (25) and skipper Andrew Balbirnie (21) got runs as the middle-order struggled to get into double figures.

Meanwhile, the incident happened in the final over of the Irish innings where the batters eaked out three runs after a complete mix-up from the batters which followed a comedy of errors from the fielders.

On-strike batter Simi Singh failed to execute a scoop shot and the ball just came back to a running Wiese in his follow-up. The bowler picked the ball and threw it on the stumps before the ball could miss its target and the batters could go for an extra run. In a bid to run them out, Namibia’s wicketkeeper Zane Green collected the ball after the fielder recovered and threw it to him at the batting end. Green then threw the ball at the non-striker end where the fielders failed to collect the ball cleanly and the batters survived eventually, giving rise to a comedy of errors.

Sri Lanka have already qualified through to the next stage of the tournament from group A and the winners of the Namibia-Ireland match will join the Islanders as the second team from the group to make it to the next round.

The Super 12 round of the T20 World Cup 2021 will begin with Australia taking on South Africa in the first Group 1 encounter at the Sheikh Zayed Stadium in Abu Dhabi on Saturday, October 23. India and Pakistan face off in their first league game on October 24. India have won five times against their arch-rivals in the tournament.