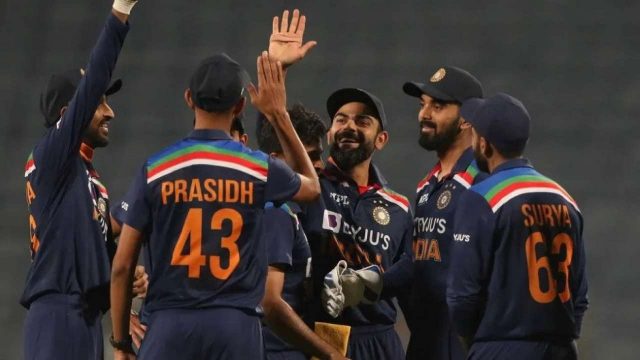 Veteran India spinner R Ashwin has returned to the Indian T20I squad for the ICC T20 World Cup 2021 which is all set to take place in UAE and Oman whereas the wrist spinners duo – Yuzvendra Chahal and Kuldeep Yadav have been left out for the mega event.

On the other hand, veteran opener Shikhar Dhawan, who recently led the limited-overs side in Sri Lanka, has also failed to get a place in the squad as well. Meanwhile, Shreyas Iyer, Deepak Chahar and Shardul Thakur have been added to the reserve players for the Indian team.

Meanwhile, former India captain MS Dhoni will also be with the team as a mentor for the tournament, confirmed the BCCI secretary Jay Shah while announcing the squad on Wednesday (September 8).

So if Kohli won this world cup then whole credit goes to Dhoni..🙄

And If India lose the world cup, whole blame goes to Kohli…😔

This news has made my day

Now This Mahirat pair will win us WC This year 🤩🔥❤️ pic.twitter.com/wH9V8t3XjN

Biggest news is that Ashwin is recalled to the #T20WorldCup team. No other spinner turns the ball away from left handers. No Chahal means a big vote of confidence in Rahul Chahar. Bit hard on Shreyas Iyer

R Ashwin is back in limited overs cricket after a 4-year hiatus. Surprised not to see Chahal in the team @BCCI

With Washington not fit, picking Ashwin is the right move. India have a spinner who can bowl in the powerplay, a non-negotiable in the UAE. Which means, India can also save up Bumrah for the second-half of the innings. And this is a superb squad. Can win the World Cup.

Two big boosts from the announcement of the team for the T20 World Cup! #Ashwin & #MSD as mentor! Brilliant @bcci @JayShah @SGanguly99