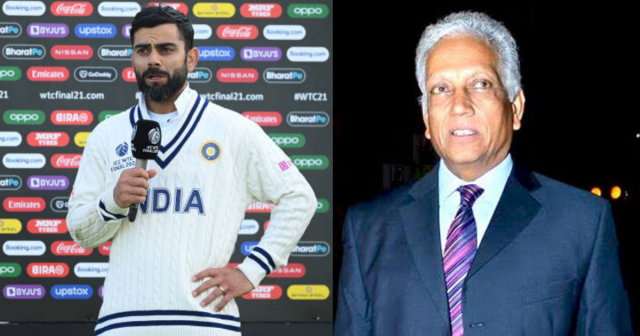 Although India lost the historical World Test Championship against New Zealand and this was the 3rd consecutive time where India cleared knock-out stages but failed to capture Trophy under Virat Kohli the captain. However Former Indian cricketer Mohinder Amarnath thinks that Virat has done a “fantastic job” and it will crucial for team India till Kohli continues to lead the team.

New Zealand performed sensationally well in the final With the bat & ball and chased the target in the last innings of the match with the help of the two best players of the team Kane Williamson and Ross Taylor. They made sure that Blackcaps lifts the Prestigious Test Mace. Former Indian all-rounder lauded skipper Kohli and stated that he sees legendary cricketers Viv Richards and Ricky Ponting in the Virat Kohli.

Take a behind the scenes look as the @BLACKCAPS skipper smiles for the cameras with the #WTC21 Final mace 📸 pic.twitter.com/SCvEdkfghl

“Virat Kohli is a great player and a very good captain also. We shouldn’t be emotional, we have many expectations and when our expectations don’t get fulfilled we start looking for something on which we can put the blame,” Mohinder Amarnath told ANI.

“Definitely he (Virat) is doing a fantastic job and a player like him comes once in a generation. Cricket will keep on moving forward and when there are so many facilities and you play for a whole year obviously your self-confidence increases.

“In Virat Kohli, I see both Viv Richards and Ricky Ponting so you can imagine how good a batsmen Virat is. And with experience, his performances are improving and it’s important for him to continue as captain,” he added.

The summit clash reached the final 6th Day of the match which was the reserve day in the WTC final at Ageas Bowl, Southampton. The blackcaps bowling unit successfully dismantled the Indian batting line-up to ensure that they don’t play many overs and don’t score big runs, India was bowled out at the score of just 170 runs.

While chasing Kane Williamson scored a half-century and Ross Taylor scored 47 runs to chase the target with 8 wickets remaining and win the remarkable match.

India started day 6 at the score of 64 at the loss of 2 wickets with Cheteshwar Pujara and Virat Kohli on the crease, then things changed completely as they were able to score only 106 more runs before getting bowled out by the pace battery of the Kiwis consisting of Tim Southee, Trent Boult, Kyle Jamieson, and Neil Wagner.

“Team is balanced but you need practice games to get used to the conditions. So I think maybe they didn’t have the time to prepare for the WTC final but congratulations to New Zealand they are the genuine winners,” said Mohinder Amarnath.

Team India on this day 38 years ago made history by winning their first-ever ICC World Cup trophy under Kapil Dev. It was the greatest moment for the Indian cricket team as they defeated the dominant West Indies by 43 runs to lift the prestigious trophy.

“World Cup 83 win gave the confidence as India had defeated a strong team and it was beginning of the good days,” said Mohinder.

“Definitely 83 win contributed to Indian cricket which we see nowadays. We performed as a unit in the tournament,” he added.

“We had great players right from the start but we didn’t have the exposure. If we talk about great players like CK Naidu, my father, Vinoo Mankad in the 60s, 70s then the 80s so you see the performances improve when the exposure increases,” Mohinder Amarnath signed off.