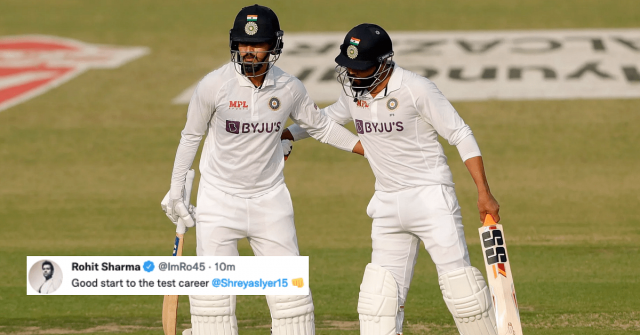 Former Indian batsman Wasim Jaffer has praised Shreyas Iyer for his memorable Test debut against New Zealand in Kanpur. Iyer ended the day unbeaten on 75 as India reached 258/5. Ravindra Jadeja was also unbeaten on 50 at stumps. Jaffer, giving credit to the right-hander for his knock, said that he has a pretty similar attitude to India’s T20I skipper Rohit Sharma.

Speaking to ESPN Cricinfo, Wasim Jagger explained what exactly he meant by the compliment he gave to Iyer.

“He plays spin really well and I think he has a pretty similar attitude [to] Rohit Sharma which I have seen coming from Mumbai. Whenever he’s in doubt he takes the aggressive approach and that’s what suits him, even in any other format. He’s not afraid to play his shots, to back his game and that’s his strength. I am happy that he played in the same manner [despite] coming at 106-3. His first scoring shot was going over the head of mid-on. That shows that he’s confident [about] his skills and that’s very nice to see” said the former Indian batsman.

Jaffer also said that Iyer went through the ranks in domestic cricket to finally make his test debut. He further said that Shreyas’s ability to change the game with his counter-attacking knocks is exactly what India requires at number five.

FIFTY!@ShreyasIyer15 brings up his maiden Test 50 on his debut game 👏👏

In 54 first-class matches, Shreyas Iyer has over 4500 runs at an average of 52.18 and a stunning strike rate of 81.54. He is becoming a regular in India’s white-ball squads and with Ajinkya Rahane and Cheteshwar Pujara nearing the end of their respective careers, the team management can look to invest in the youngster.

Shreyas Iyer drew a lot of accolades for his unbeaten knock and in the process added a 113-run stand with Ravindra Jadeja for the fifth wicket. They will have the hard task of continuing the good work on day 2.